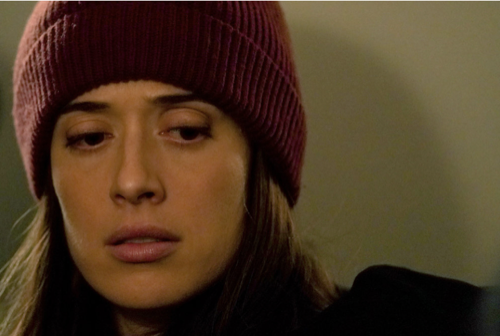 In tonight’s Chicago PD episode, Burgess returned home to find Makayla gone. She had been taken. The people that grabbed MaKayla had brutally attacked the nanny and she was dying by time Burgess returned home. The only thing she could say was that “they took Makayla”. Gabby later died of her wounds. Burgess and Ruzek searched the apartment for Makayla and she wasn’t there. They went looking in the hallways.

They spotted a neighbor who said they saw two masked man carrying Makayla out onto the freight elevator. The syringe and surveillance cameras had showed the men had drugged Makayla before they took her. It was probably to stop the little girl from fighting or calling for help. And all three got away before Burgess or Ruzek could stop it.

The two detectives called it in. They also called Voight. Voight’s whole team was working on the case and they wanted to find Makayla before she could be harmed. One of the first things that the team did was check surveillance cameras outside of Makayla’s school. They spotted her uncle Theo waiting for her and watching her as she got into the car with Gabby. The team later went to the Theo’s home with a warrant. They searched the place. They didn’t find Makayla. Theo said he respected the judge’s decision and that he didn’t grab the girl. The team didn’t believe him so they arrested him.

They also continued looking into him. They found out that this supposed innocent man had started liquidating assets just recently. He was even selling stocks. Even at a loss. He was doing everything he could to get money fast and he would only do so if he had been hit by ransom demands. It would match up with his phone records. The team went back to Theo. They asked him about the ransom demand.

Theo replied that Makayla’s life was too important to risk and so he wasn’t helping the police. He refuses to work with Burgess. He somehow blames her for this. He said he doesn’t have anyone in his life who would hurt him like this. And so he refused to cooperate with police.

Theo wanted to make the ransom drop without their help. He was told that Makayla would die if he got the police involved and no one wanted that to happen. Voight released Theo. They didn’t try to impede him as he collected the ransom money and they instead tried coming at the investigation a different way. They looked into the number that made the ransom demand. They found the store that sold the burner and traced it back to a guy who often buys burners. He was apparently doing so because he was selling clones of them at an up cost. The guy was shady, but he had nothing to do with the kidnapping.

The team checked the phone records of the burner. They found out that the phone contacted Makayla’s biological father’s girlfriend Nia and that they talked several times in code from the prison phone. The detectives went to Nia. They asked her to return Makayla and she instead got off on making Burgess suffer. She said now Burgess knows how it feels to have her own child stolen away. Only they kept looking into Nia. It turns out Nia was still in contact with her boyfriend Tariq who was also behind bars and that this was Tariq’s plan all along. He needed protection money. He knew he wasn’t going to get it from his brother and so he and Nia cooked up this plan.

They knew to target Theo because Tariq was contacted when Theo went for custody. This also alerted them to the fact that Burgess took in Tariq’s daughter and that’s how they knew where to find her. The team checked police visitation. They found who they were looking for and they even knew the name of his partner. They went looking for them. They found their abandoned hiding place. It didn’t bring them any closer to finding Makayla and so they went ahead with the ransom drop. They finally managed to convince Theo to let them help when the worst thing happened. The drop wasn’t clean cut.

The kidnappers didn’t bring Makayla to the drop. They instead had Theo drop the money in plain sight and walk away. Then one of the kidnappers walked up to grab the money. Voight’s plan was to wait for the kidnappers to lead them back to Makayla, but Ruzek ruined that plan by getting hot headed and following the guy too closely. He was seen. The guy ran off and Ruzek chased him. It got into a gun fight and Ruzek was forced to kill the other man. They thought that ruined their chances of getting Makayla back only they got lucky because the other kidnapper was still in the area and they later found him by tracking the vehicle he used.

They caught up to their guy. They disarmed him and they found Makayla alive in the back of his car. Makayla went to the hospital to get checked out and Burgess even allowed Theo to come with them and thankfully Makayla is fine. She was traumatized but otherwise in good condition.