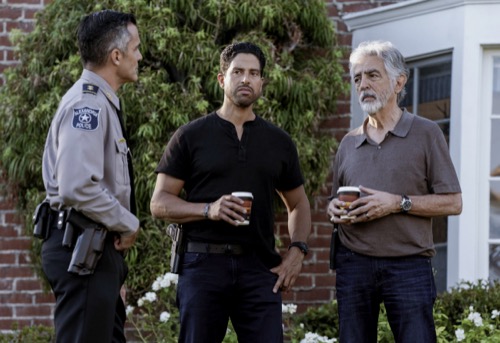 Tonight on CBS their hit drama Criminal Minds returns with an all-new Thursday, November 24, 2022, season 16  episode 1 premiere, called “Just Getting Started,” and we have your weekly Criminal Minds recap below. In tonight’s Criminal Minds episode season 15 episode 10 as per the CBS synopsis, “When a teenage girl is abducted from her Bethesda, Maryland home and her parents are killed, the BAU believes the same perpetrator killed a family of four in Alexandria, Virginia.

Meanwhile, Lewis investigates a number of bodies that were found in a Yakima County, Washington storage container, and developments in the abduction case bring former analyst Penelope Garcia back into the fold.

Tonight’s Criminal Minds episode begins with Elias, he looks into his trunk and pulls a body out a brings into some kind of work bunker, the person is still alive with duct tape on his arms securing him to a chair. Elias sharpens a knife and skits the guy’s wrists.

Fast forward to 2022, it’s Elias again, he has night vision goggles on and turns off security cameras to a home. A woman gets up out of bed and Elias is there, she screams and he covers her mouth with his hand.

Yakima County, WA, Tara calls Luke, she wants his help on an active killer case, they have 16 dead bodies, 100% serial killer. Luke can’t go, he promised Rossi he would hold down the fort for another week, he is focused on the Virginia case. She says she can get Emily approve it but Luke tells her that she has a lot on her mind since her promotion.

Emily Prentiss is in a meeting when Deputy Director, Bailey, interrupts. Bailey wonders the last time Rossi was in the office, maybe all the cases finally caught up wit him.

JJ is home, she kicks her feet up and watches her sons on her phone. She finds out that one of her sons has a girlfriend, and can’t believe it, he was her baby a minute ago. JJ gets a all from Rossi, he tells her about a case in Alexandria, the Westbrook family, and he doesn’t think it is a one off.

The next day, Rossi gets a call, he gets a tip, rushes through his morning routine and heads out. Luke and Rossi meet up at the scene of a crime, the baby was saved, the parents were killed. Kidnaped the teenager daughter. The grandmother is with her grandchild who was spared. She says that she never dreamed that her daughter would be killed by a monster.

Quantico, VA, Bailey asks Prentiss if she wants the entire BAU on the case.

The bodies are being taken out of he house, Luke tells JJ that he hopes the teenager is still alive. The father’s throat was slit, the killer took out the biggest threat first. What they don’t understand is why he is now abducting. Rossi shouts to issue an Amber Alert for Chrissy Delaney, now!

JJ apologizes to Luke for Rossi blowing up, he says it is no problem, doesn’t bother him. She tells him that it has been year and Rossi doesn’t talk about it and they can’t be the punching bags.

They get the neighbour’s footage, the killer took the Delaney’s car to kidnap Chrissy.

Luke and the police find the Delaney vehicle, Luke opens the back, but there is no body inside. They bring the guy to the station where Rossi interrogates him. The man claims he didn’t hurt anybody, he just bought the car. He purchased the car over text. He went to Walmart, gave the money to a girl and took the keys, drove off with his new car.

Chrissy is still alive and in the car with her abductor, he turns the radio up and ignores her and she pleads to be let go.

JJ finds that Chrissy has a profile on SOAR, and so does victim Jessie Westbrook. SOAR is supposed to be a safe place online for teenagers.

Penelope is having a baking class she Luke arrives at her door, she tells her students to wrap it up, they will reschedule. Luke tells Penelope she misses him. Penelope says no, leave. He tells er that Chrissy Delaney was targeted on SOAR, Penelope says no way, she created it and secured it. She says she created SOAR to avoid things like this, to avoid stranger danger. She goes on her computer, looking at SOAR and says she wants to talk to Rossi. Luke says he is not the same anymore.

Penelope is with Luke, they video chat Rossi and JJ. Penelope things the Unsub is late teens, early twenty tops. Aside from her, nobody born before the year 2000 has access. Rossi says someone does, because the killer is in his 40’s period. Rossi was a little hotheaded and Penelope tells her that he can’t talk to her like that and she shuts down the video connection.

Penelope goes back to her computer to keep looking for more information.

Chrissy is in the car, the kidnapper takes her into a remote trailer.

Prentiss goes in to see Rossi, she tells him this is not his burden alone to carry. She tells him to go home and spend time with his family. He tells her that she is a better person than he is and he is ok with that.

Penelope says that Luke found four notifications on both accounts, Jessie and Chrissy’s. They were from a younger man, then she finds 2 dozen acres of farm land that the state took over years ago, the parents overdosed on oxy, the child, RJ, bounced around through foster homes. Rossi tells JJ to move, they are going to head to the property.

Chrissy is in the trailer with RJ, he gives her a clue to who he is and she realizes they were talking on SOAR. He tells her that she was always kind to him, and he wants an adventure with her. He tells her that it is just them now, she sees a hammer and whacks him over the head, but he grabs a gun and pulls it on her. Rossi and the team arrive to hearing a gun shot. She comes out of the trailer with the gun, she says he killed her family and it is all her fault. Rossi tells her that her grandmother has her brother and they are worried about her.

She puts the gun to her head, Rossi tells her that none of this is her fault, she has to want, choose to fight and survive. He tells her that it is almost a year since his wife died and it hurts like hell. He says her parents want her to live, she gives him the gun and he hugs her. Luke tells JJ that Chrissy is going to need a lot of therapy. They look in his trunk and a lat of the stuff seemed dated for a 19-year old, they don;’t think he didn’t this alone.

Tara sends Rossi photos of matching kill kits they found on their site. Maybe, RJ was getting help from an older UnSub.

Elias is digging hole while he is listening to the radio when he hears about what happened to RJ.