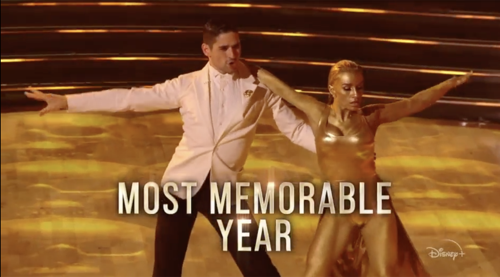 Tonight on Disney+ we have the first ever ‘Stories Week’ as our favorite reality TV show finally returns to the ballroom when Dancing With The Stars season 31 episode 5 airs. Tonight, we have your all-new Monday, October 17, 2022, season 31 episode 5 Dancing With The Stars recap below! It’s a ‘Dancing with the Stars’ 2 Night Event with the return of Most Memorable Year and a celebration of Prom Night. So sit back, tune in on Disney+ and enjoy a great show accompanied here by an amazing real-time DWTS recap!

Tonight’s DWTS episode begins the stars most memorable year. Host, Tyra Banks and Alfonso Ribeiro are on stage. It’s an emotional night as they hit the half way mark for this season. From heartbreaking to heartwarming, from triumph to tragedy.

2009 is Trevor’s most memorable year, he got a job on Days of Your Lives, he panicked and he got fired. But it turned out well, he got another acting job and the rest is history.

Judges Comments: Len: “You didn’t force that dance, you didn’t over try, it gave it more control. That was your best dance.” Derek: “I like the haircut. This week I felt your precedes, you were in the moment, well done.” Bruno: “Trevor is back, you went for a Thelma & Louse vibe.” Carrie Ann: “I cried in this dance because I could feel how much you were trying. A few small corrections, fabulous first dance.”

Shangela’s most memorable year was when he broke his leg from a helicopter stunt, the death drop. He couldn’t perform and felt like his life was being taken away from him.

Judges Comments: Carrie Ann: “Tonight was so different, you brought a different side of yourself. I loved the most, was when you made a mistake and you loved yourself right into the dance.” Len: ‘It was lovely, it moved beautifully across the floor.” Derek: “Sometimes getting an injury is a blessing in disguise. This was great, really great, wonderful to see this side of Shangela.” Bruno: “So good for you to show your softer side, it was good to see. Don’t tense your shoulder.”

Jessie’s most memorable year is 2014 the year she became a mother. She couldn’t wait to have her own child, when she had Viviane she felt complete.

Judges Comments: Carrie Ann: “What I am so proud of is that you have stepped into this game, you are such a strong dancer.” Len: “There was a good amount of tango, it was sharp and had attack. It had purpose, and determination, well done.” Derek: “When you stepped into it, I really felt it, you sold me on that second half, well done.” Bruno: “I love when you dance to your own tune. He second half of the routine was spot on.”

Gabby Windey and Val Chmerkovskiy: foxtrot (“If the World Should Ever Stop” by JP Cooper)

Gabby’s most memorable year was 2020 when she was an ICU nurse during the pandemic. It does have a heavy place in her heart, it was terrifying. She saw a lot of death and isolation, but nobody died alone. It taught her patience and resilience.

Judges Comments: Carrie Ann: “All of what you have been through, I cannot even imagine. I understand you and the way you dance now. You are stunning and dazzling out there, just let it go. It’s still stunning.” Len: “Love lyrical movement. It had effortless ease, well done.” Derek: “It was graceful, effortless and stunning.It was gorgeous.” Bruno: “You are flying high, your connection and the trust you have with Val, unbelievable. You looked magnificent.”

Joseph’s most memorable year is 2022, the year that he decided to listen to himself endnote the outside noise. The big struggle from his is to do things his way, outside of his famous dad.

Judges Comments: Carrie Ann: “That was one of the best rumba’s on the show by any man. Your hip action was so beautiful. It was amazing, you have been listening and learning, and it is paying off.” Len: “The rumba is notorious for being a difficult dance. You did your best dance this season, well done.” Derek: “There is only your path, it was so beautiful, fundamental, beautiful rumba. So pure, so beautiful.” Bruno: “Tonight you did your shapes with so much refinement and control. And what is going on with those hips?”

His most memorable year was 2019 because they began filming Coda. Before that it was hard to find roles. He didn’t find a role for three years

Judges Comments: Carrie Ann: “You welcome us into this world, tonight was your best dance. Your foot work was great.” Len: “A lovely connection between you both. It was gentle, quiet, understated. I thought it was so well done” Derek: “This is the type of dance that transcends this show. You didn’t miss a beat, the lifts were compelling. It was incredible.”Bruno: “You are so real, so honest, you make me feel like I am dancing with you. You are unique and special.”

Jordin’s most memorable year is 2017 when she met her husband. Before that she was emotionally scared by things that happened the previous year. She met him through their moms. He pushes her to be better.

Judges Comments: Carrie Ann: “I want to get married now. You take such ownership of every move that you do and that makes you so special. Watch your hand that is not in hold.” Len: “Plenty of attack, plenty of action, great hips. You danced it with so much confidence, you came out and you sold it.” Derek: “You always perform and light up the room. But it felt a little unrehearsed to me.” Bruno: “Spicy, I would marry you. You made it look easy and spontaneous.”

Charli D’Amelio and Mark Ballas: contemporary (“when the party’s over” by Lewis Capaldi)

Charli’s most memorable year is his year, the past few years were crazy, she always worried what people thought of her. She suffered with anxiety, she had all these eyes on her. She actually went to therapy to helps her understand why she was feeling the way she was.

Judges Comments: Carrie Ann: “I want to thank you for being such a responsible person and telling that story. Mark, you scared me so much, that was the reality of anxiety. When you lifted her with your foot, it was perfection.” Len: “This was really contemporary, it was full of interesting choreography.” Derek:”This was stunning, the concept was bold and daring. It was phenomenal. That was a moment.” Bruno: “This is one of those dances that define the show, it was heart wrenchingly powerful.”

Vinny’s most memorable year was 2009 when his whole life changed, Jersey Shore aired. He filled out an application, he was a mama’s boy, he was delivering pizza when the show aired the first three episodes. As soon as the show aired, they were like the Beatles. He was able to buy his family a house.

Judges Comments: Carrie Ann: “You are exactly why people love the show. They see themselves in people like you, coming on here and having a great time.” Len: “I thought it was a clear dance, full of energy, well done.” Derek: “You have become one of my favorites, I love watching you. You come out overtime with a smile on your face, I loved it.” Bruno: “You opened up the party zone tonight. It was perfect for you.”

Heidi D’Amelio and Artem Chigvintsev: rumba (“Can’t Take My Eyes Off of You ” by Lauryn Hill)

Heidi’s most memorable year was 1997 when she moved to New York city to try and make it in the modelling industry. It was terrifying. She had to be fierce. The first job she booked was runway. She met Mark that year, and she fell in love with herself.

Judges Comments: Carrie Ann: “I don’t think we have had anyone consistently grow like that. Your posture is amazing, you are channeling all of you into every dance.” Len: “There was no messing about, I like the feeling of it. I felt a growing romance, your leg and foot placement was lively. It was absolutely beautiful.” Derek: “You have improved so much it is insane. Your leg action, you listen, that was fantastic. So clean and beautiful. I think you have 10’s in you, I need more emotion but that was sold.” Bruno: “My eyes were popping for you, it was sensual and seductive. You have to work hard to get there, but it was worth it.”

Wayne’s most memorable year was 2003 when his daughter was born, when he saw her come into the world he knew that she needed to be taken care of and he had to step it up.

Judges Comments: Carrie Ann: “That was a beautiful tribute, you have come so far with the way you are holding yourself. One tiny note, sometimes you kick off quickly, it throws me off of watching you.” Len: “It had an elegance, it was sophisticated. Watch your hand though, I am being picky, it was fabulous.” Derek: “I kind of don’t want to judge, it is so beautiful, so entertaining, it was so beautiful.” Bruno: “What you did is capture the essence of love at first sight, it was so pretty, so beautiful.”

Selma Blair and Sasha Farber: waltz (“What The World Needs Now Is Love” by Andra Day)

Selma’s most memorable year was 2018 when she was diagnosed with MS, she was sick for so many years. She actually thought she was a failure as a mom because she didn’t know what she had. The universal support from everyone changed her life.

Selma tells Sasha that she can’t go on with the competition because of her chronic illness, her body is taking a hit and it is too much trauma for the condition that her bones are in. She is grateful do one last gentle dance.

Judges Comments: Carrie Ann: “Watching you every week is like watching an elegant miracle. You are nothing but an inspiration.You are a blessing and a gift. Sasha, this is one of your best seasons ever. Together you both inspire all of us” Len: “This competition is tough for everyone. If the other climbed hills you climbed mountains. Congratulations.” Derek: “You have been a beacon of light. Your reputation has been incredible, you bring nothing but joy to everyone.” Bruno: “It is my privilege to have known you, you have all my respect and adoration. Your star has never shone brighter.”

Nobody is being sent home tonight. Tonight’s scores will be added to tomorrow’s scores to determine which couple will be eliminated.