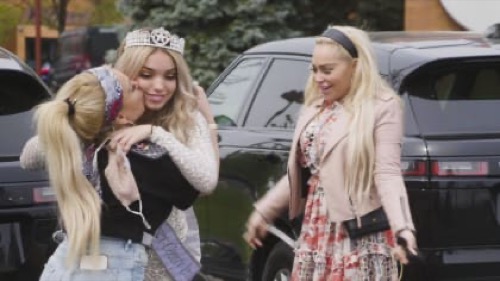 Tonight on TLC their new reality show Darcey & Stacey premieres with an all-new Monday, January 17, 2021 episode and we have your Darcey & Stacey recap below for you. On tonight’s Darcey & Stacey season 3 episode 2 called, “Pageant Mom Drama,” as per the TLC synopsis, “Darcey transforms into a pageant mom as she helps Aniko prepare for the Miss Teen Connecticut competition; Stacey confronts Georgi about his intentions with her sister; Georgi and Darcey see a therapist to determine how to salvage their relationship.”

Tonights Darcey & Stacey’s episode begins with Darcey taking Aniko and Aspen on a shopping spree. They are there to buy cothes for Aniko’s pageant. Aniko wants Darcey to wear a mom dress. Darcey is just so excited to be a pageant mom. They stop at a café and Darcey’s dad Mike shows up, she invited them all together to tell them that Georgi is back in her life.

They are all having desert when Darcey tells them she and Georgi are talking again, she wants to go back to the hosue with him so she and Georgi can work things out. Mike says their relationship is a rollercoaster. Her daughters are more understanding, they tell her to do whatever makes her happy. Mike is more against it, he doesn’t want any drama, screaming and yelling. She tells him that they are going to couple’s counseling and that he thinks is a good idea.

Stacey and Florian are driving, she tells him that Darcey want them to pick up a couple of things because she is staring with dad and Georgi is going to stay at her apartment. Florian doesn’t think it is a good idea, it is too fast. Stacey is worried that she is going to get hurt again. Stacey feels like she has to protect her sister. They arrive at the apartment and Stacey asks Georgi what his intentions are and he says to work together to fix this relationship.

She says they are so up and down and she doesn’t know how Darcey deals with this. She also mentions that he is living there rent free and he had a whole month to figure things out with Darcey, and what about finding a job. Florian tells Stacey to chill, she says no and leaves.

Aniko is super nervous, it is the real start of her journey, she has worked real hard to be in this pageant. Aniko is worried about her mom, because she is so loud. Darcey surpises her girls with telling them that they are going to Miami, the girls are excited. At the pageant, it is orientation day. Darcey believes in Aniko and thinks she is going to win.

This is Aniko’s first competition and some of the other girls have been in this for four years trying to win a crown. They do professional headshots and she feels so pretty. Darcey and Stacey are sitting together and Stacey tells her about how heated the conversation got. And, that he said that he is still doing massages. Darcey is not happy, he is lying to her again.

The next day, Georgi and Darcey are in therapy, she mentions that Stacey mentioned that Georgi told her he was in Virginia doing messages, he says he said it because Stacey made her feel uncomfortable. The therapist says that each of them only see things in their own perspective, they need new communication skills. Georgi says he doesn’t feel heard, Darcey holds his hand and is happy that he opened up and told her.

Stacey calls her cousin Shannon with Florian and tells her that they are all coming to Miami. Shannon is thrilled and can’t wait to see them. Meanwhile, Darcey invites Georgi to Miami and tells him that he needs to make amends before they leave, and it has to include an apology for his lying. He agrees. She doesn’t know how Stacey is going to react to Georgi going to Miami, but she is tired of being pulled in all directions.

Darcey and Georgi invite Stacey and Florian to dinner and it is awkward. Georgi starts by apologizing and says he is there to work on his relationship with Darcey, he loves her. Darcey drops the bomb that she wants Georgi to go to Miami, Stacey says she doesn’t feel like he deserves to go and they don’t want drama. Darcey reminds her that is her company too, and Georgi says he won’t have drama. Stacey tells her to do what she wants but she doesn’t understand why her sister keeps putting herself in this circle.