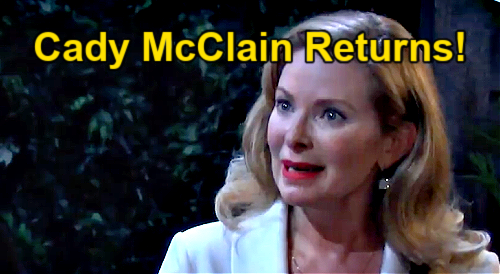 DOOL viewers can already see how Days is laying the groundwork for Abigail’s demise.

Abigail is ready to take risks for her next investigative report, so things are starting to feel ominous.

However, it’ll still come as quite a shock to Chad DiMera (Billy Flynn) when he apparently finds Abigail dead.

It looks like Chad will be the one to find Abigail’s body, so he’ll be devastated and will face the tough task of spreading the news.

Once Jack and Jennifer get devastating updates, Days spoilers say they’ll rush back to Salem in search of answers.

Of course, there’ll be funeral planning to do as well, but Jennifer and Jack will also want justice for their murdered daughter.

Cady McClain will take over for Melissa Reeves during this next portion of the story, so it’ll be fun to see her spin on the role of Jennifer again – even if it’s under tragic circumstances.

Although Jennifer will have to deal with extreme sadness, you can bet there’ll be plenty of anger mixed in.

Jennifer will want the person responsible to pay for killing Abigail and will struggle to figure out who could’ve done such a thing.

Since Jack and Jennifer have a knack for investigations, they may do some detective work.

That might be necessary since the incompetent Salem PD always makes a mess of tough cases like this.

Once Jennifer and Jack gather with the rest of Abigail’s loved ones for the funeral and burial, they can focus on avenging their daughter’s death.

Some clues will surface eventually to help nail down the first suspect, but we’ll see who actually uncovers them.

There’ll be some major twists and turns in the murder mystery that’s brewing, so Days fans will want to stay tuned!

Days of Our Lives spoilers say Abigail’s grim fate will lead to a world of trouble for several Salemites.

CDL’s where you want to be for fantastic Days of Our Lives spoilers, updates and news, so stop by often for more DOOL details.