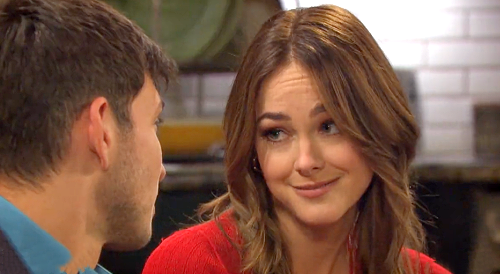 Days of Our Lives (DOOL) spoilers tease that Chad DiMera’s (Billy Flynn) jealousy will burn as Alex Kiriakis (Robert Scott Wilson) and Stephanie Johnson (Abigail Klein) hit the sheets. The love triangle stakes will be raised as Stephanie and Alex take their relationship to the next level, so here’s what DOOL fans can expect.

Now that Stephanie and Alex have shared a kiss, they’ll continue getting to know each other over a Thanksgiving date.

Since Kayla and Steve made the trip to Seattle for Tripp’s rescue, they might as well stick around for a Thanksgiving meal.

Stephanie may assure Steve and Kayla that she’ll be fine on her own, but Alex will invite her over so she doesn’t have to be alone. This holiday date will bring them closer, so Stephanie will see even more potential in Alex and their future together.

During the week of November 28-December 2, Days spoilers say Stephanie and Alex will share another kiss, but they won’t stop there! As the passion between them erupts, Alex and Stephanie will take things to the bedroom.

It’ll be a big step for Stephanie since she’s been so guarded with her heart, but Alex will bring those walls down quickly.

The more Stephanie starts to trust Alex, the harder she’ll fall for him.

Of course, that’s bad news for Chad since he’s dealing with some complicated feelings.

Although Chad isn’t ready to move on from Abigail DiMera (Marci Miller), he still feels something more than friendship for Stephanie.

Chad supported Stephanie’s decision to move forward with Alex, but he’ll still burn with jealousy as their romance heats up.

Days spoilers say Chad will realize things are really beginning to sizzle, so he’ll have to hide that jealous streak as best as he can!

However, Kate Roberts (Lauren Koslow) is worried about Chad letting this second chance at love pass him by.

Will Chad eventually determine that he’s made a mistake and try to undo it?

Time will tell, but Chad will have to watch Alex make major progress with Stephanie for now.

Days of Our Lives spoilers say Chad, Stephanie and Alex’s love triangle will come with more twists and turns, so stay tuned.

CDL’s the place to be for terrific Days of Our Lives spoilers, updates and news, so make us your one-stop DOOL source.