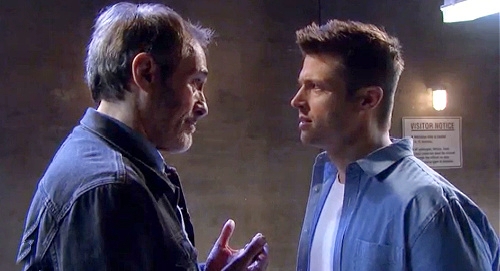 Days of Our Lives spoilers reveal that Orpheus (George DelHoyo) told Christian Maddox aka Evan Frears (Brock Kelly) about Jan Spears’ (Heather Lindell) baby. Evan has never gotten over losing David Ridgeway (formerly Caleb and Kyler Ends). Evan isn’t going to let another man be the father to his new baby. Will Evan have the guts to betray Orpheus, though?

DOOL spoilers reveal that Evan and Orpheus got caught up during the episode that aired on Wednesday, June 29. Orpheus told Evan not to worry about David, who is now living in New Zealand.

Orpheus let Evan know that he has another son in Salem. Of course, Evan was completely confused. That is when viewers got to see flashbacks confirming that the paternity test was tampered with.

Evan was completely blindsided by the news that he got Jan pregnant in the prison infirmary. Evan also couldn’t believe that Orpheus helped Jan trick Shawn Brady (Brandon Beemer) to think he was the child’s father.

Evan had just told his father how much he regretted working with the devil to target Bo Brady Weston (Cody and Warren Kransnow).

Evan said instead of seeing an innocent baby, all he saw was a chance to punish Ben Weston (Robert Scott Wilson) and Ciara Brady Weston (Victoria Konefal).

So, for Orpheus to tell Evan he has a son in Salem but can’t have access to him was pretty cruel. Why did Orpheus tell Evan anything at all?

Days of Our Lives spoilers reveal that Orpheus told Evan that Jan has no idea that they are father and son.

Then, Orpheus said that he needs Jan on the outside. Orpheus wouldn’t share details about his plan with Evan.

All he said is that he’s playing a very high-stakes game. This is never good news.

Orpheus and Evan are both villains and have committed horrifying crimes.

However, there is one stark difference between the father and son. Orpheus has no soul and feels nothing for anyone.

Evan on the other hand seems to be more troubled than evil. Evan has expressed regret before and even sought treatment at one point.

Plus, Evan has already lost one child and isn’t going to want to lose another one.

Evan might be in prison but would like the chance to actually meet his new baby. It might even help Evan reform himself and change his ways.

With that being said, could Evan’s desire to be a father outweigh his loyalty and fear of Orpheus?

Will Evan request a phone call or visit with Shawn? If Evan tells Shawn the truth, then how will Orpheus react?

This might be Evan’s only shot at redemption, so we will have to see how the story plays out.