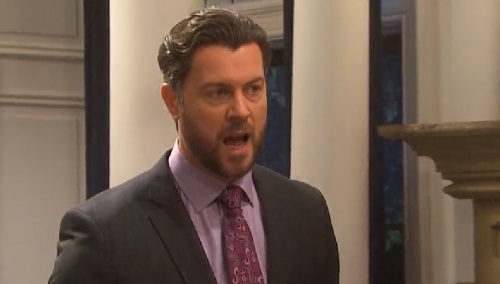 At DiMera Enterprises, Gabi Hernandez DiMera (Camila Banus) felt like this marriage proposal was coming out of nowhere, but Li Shin (Remington Hoffman) made a sweet speech and admitted he’d been captivated by Gabi for quite some time.

Although no one could replace Stefan DiMera (Brandon Barash), Gabi decided not to give up on love and accepted Li’s engagement ring. Li was eager to celebrate, but first they had to attend Jake DiMera’s (Brandon Barash) memorial and announce their powerful union.

In Chloe’s hotel room, Kristen was flustered and questioned where “he” was. Chloe and Brady Black (Eric Martsolf) were confused, so Kristen lied about trying to catch Chloe cheating with some intern she’d supposedly been flirting with.

Brady and Chloe still thought Kristen had a secret, but she didn’t admit anything and ultimately headed back to the lab. That’s where Kristen blamed Dr. Wilhelm Rolf (Richard Wharton) since she assumed Stefan was seeking out Gabi and that the programming didn’t work.

In the DiMera crypt, Stefan was baffled when Ava called him Jake, but she rushed out after insisting he wasn’t real. Once Stefan looked at Jake’s plaque and saw the same birthdate as his own, he guessed he was being mistaken for his twin.

Next on Friday’s Days episode, Ava wound up in the DiMera living room and admitted to seeing “Jake” again. Johnny returned to the crypt with Ava and tried to help her get to the bottom of the situation.

Although Johnny suggested Jake might really be alive or that Ava had been drugged, she worried she was losing her mind. EJ was insensitive when he found out about the latest “hallucination,” so Johnny flew into a rage and accused him of gaslighting Ava somehow.

In Ava’s bedroom later, Johnny tried to convince her to stay at the mansion. Ava didn’t get why Johnny was being so nice to her, but he insisted he cared about her a lot before they kissed passionately.

As for Gabi and Li, they spread their engagement news to Anna DiMera (Leann Hunley), Tony DiMera (Thaao Penghlis) and eventually EJ. Although EJ acted like it was a power play, Li made it clear that they loved each other.

Tony, Anna, EJ, Gabi and Li all ended up in the crypt for Jake’s memorial service, but Gabi stayed behind once it was over. Li understood that Gabi wanted to get Stefan’s permission to move on and left her to it.

After Stefan poured himself a drink in the empty DiMera mansion living room and greeted Stefano DiMera’s (Joseph Mascolo) portrait, he returned to the crypt and shocked Gabi with his arrival.