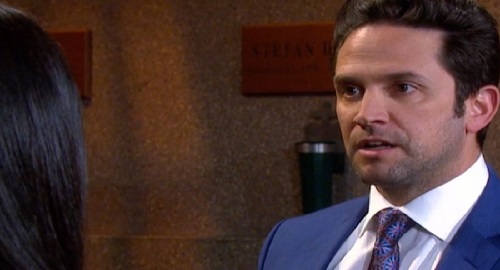 Although Alex wanted to celebrate over drinks, Stephanie made it clear that he needed to back off and keep things professional. Alex finally got the message, but he was visibly disappointed to lose his shot with Stephanie.

Paulina assured Chanel and Allie that she’d cover the charges before ordering up another giant cookie batch for her own campaign.

Afterward, Paulina met with Stephanie to discuss the prep for a new interview. That led to Paulina opening up about her love story with Abe and how sometimes you don’t have a clue what you want.

Stephanie seemed affected by Paulina’s words and later thought back to them while sitting at the bistro.

Chanel agreed that Alex could still find someone special, so he appreciated the advice.

Once Alex ran into Stephanie at the bistro later, he offered to get a table on the other side of the restaurant. Stephanie decided they could celebrate professionally together since they were both there.

In the DiMera mansion living room, EJ was eager for Li Shin (Remington Hoffman) to leave and bickered with him about his impending marriage to Gabi.

In the DiMera crypt, Gabi assumed Jake DiMera (Brandon Barash) was standing in front of her. Stefan insisted it was him and explained how Dr. Wilhelm Rolf (Richard Wharton) brought him back.

Gabi finally believed Stefan once he showed off his heart transplant scar, so she planted a kiss. Stefan shoved Gabi away and warned that he didn’t reciprocate her love.

Although Gabi begged Stefan to remember, he claimed she messed up his romance with Chloe to get her foot in the door at DiMera Enterprises.

On Monday’s Days episode, Li played dumb about Stefan once he entered the crypt. After Stefan saw Gabi’s engagement ring, he acted like it was good that she was moving on. Gabi was distraught as Stefan walked out, but Li pulled her into a hug and offered comfort.

Back inside the DiMera mansion, Johnny and Ava’s kiss escalated to falling into bed together. Ava eventually pumped the brakes since she was old enough to be Johnny’s mother and didn’t want to interfere in his relationship with EJ – not to mention she might be losing her mind.

Johnny argued that he’d always been mature for his age, and EJ was creating problems in their relationship on his own. As for the part about Ava losing her mind, Johnny argued that EJ had gaslit other women in the past.

Even so, Ava brought up Jake and how she was still mourning the loss, so she thought she should stick to friendship with Johnny.

When EJ walked in and found Johnny in bed with Ava, he flew into a rage. EJ acted like Ava was using Johnny to get back at him and threw her out of the house.

Ava was more than ready to leave – and Johnny vowed to go with her. That no longer bothered EJ, who suggested it was a win-win if Johnny went, too.

Once EJ stomped off, Johnny and Ava talked about how they had helped each other during a difficult time. Ava assured Johnny that she valued his friendship beyond getting revenge on EJ, but they both liked that it was a bonus.

Since Ava was headed to the Salem Inn, Johnny wanted to stay there, too – at least for the night. Johnny assured Ava that he could sleep on the floor or in a cot, so she got on board with that idea.

However, the two of them kept up the charade and let EJ think things were more than friendly downstairs. EJ fumed as Johnny helped Ava with her suitcase and called her a cougar, so Ava did a little roar as she left with Johnny.

Back in the town square, Chanel and Allie shared a close moment right as Johnny appeared with Ava. When Allie and Chanel learned that Ava was getting a room with Johnny, it caught them both off guard.