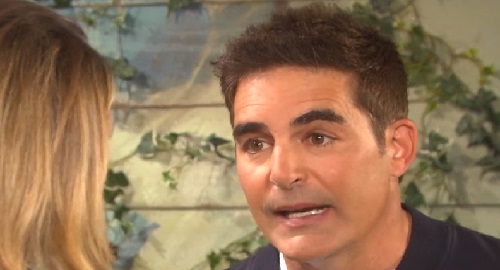 Days of Our Lives (DOOL) spoilers for Tuesday, September 13, tease that Rafe Hernandez (Galen Gering) will have a jealous nightmare while Eric Brady (Greg Vaughan) makes a confession. Orpheus’ (George DelHoyo) ex-hostages will also faint, so here’s what DOOL fans can expect.

Marlena Evans (Deidre Hall), Kayla Johnson (Mary Beth Evans) and Kate Roberts (Lauren Koslow) have already struggled with some sneezing fits, but more symptoms are on the way. Dizziness will strike next, so Roman will urge Kate to get checked out at the hospital.

After Kate suddenly faints, Kayla will rush to her aid. Unfortunately, Kayla will ultimately faint as well – and then it’ll be Marlena’s turn to collapse.

It’ll become obvious that something is seriously wrong with Orpheus’ former captives. Days spoilers reveal that Orpheus gave Kate, Kayla and Marlena a rare toxin – one that he feels confident will end in certain death for all three of them.

Before John Black (Drake Hogestyn) and Steve Johnson (Stephen Nichols) realize the gravity of the situation, they’ll be busy trying to find Orpheus and neutralize any further threat.

The search for Orpheus will grow truly dire once he sends videos explaining his full revenge plot. There’ll be concerns about the nature of this toxin and how to locate an antidote soon enough.

Other Days spoilers say Rafe will have a nightmare that involves Eric and Nicole Walker Hernandez (Arianne Zucker). Since Nicole will likely betray her husband in that dream, Rafe will wake up jealous and worried about her lingering feelings for Eric.

Later, Rafe will grill Nicole about her ex and what’s still in her heart. Although Nicole may claim she’s over Eric, Rafe won’t be so sure that’s true.

As for Jada Hunter (Elia Cantu), she’ll also try to figure out what Eric’s feeling. Days spoilers say Eric will confess to Jada, so he may admit he hasn’t fully put Nicole behind him.

That said, Eric is trying and seemingly wants to see where things might lead with the new woman in his life. That may satisfy Jada for now and let her open her own heart just a bit more.