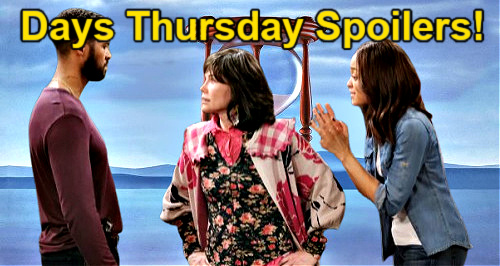 DOOL spoilers for Thursday, June 30 reveal that Lani will still be waiting for her fate.

Lani knows that she could go to prison for killing TR Coates (William Christian). Even though there were extenuating circumstances, Lani signed a confession.

There could have been ways for Lani to get a lawyer and negotiate for a lesser charge. However, Lani’s guilt was just too much to bear.

While Lani waits to find out what her punishment is, she gets an unexpected visitor. It is teased that this person is an old friend of Lani’s.

It sounds like Lani might get a visit from Kristen DiMera (Stacy Haiduk). Despite Kristen being a fugitive, she has her ways of getting in to see Lani without anyone knowing it’s her.

Kristen will probably offer Lani a way out. However, Lani is ready to take full responsibility for her actions.

Plus, Lani would never be able to put Eli Grant (Lamon Archey) and the twins through that.

While Lani is visiting with her old friend, Trask tries to pull a fast one. The DA loves to make an example out of people, especially since Lani isn’t her biggest fan.

Trask’s perspective is that another Salem detective abused their power. For Trask, this is about public perception.

However, Abe and Paulina aren’t going to let Trask get away with this.

Days of Our Lives spoilers reveal that on Thursday, June 30, Theo and Chanel will cross paths. Theo will try to help Chanel with her romantic dilemma.

Chanel doesn’t know if she should be with Johnny DiMera (Carson Boatman) or Allie Horton (Lindsay Arnold).

Theo will share some words of wisdom that could help Chanel make a final decision.

Days of Our Lives Spoilers for Thursday, June 30

It is teased that Lani won’t be the only one leaving Salem. Eli is also going to exit but what will take him away from his loved ones?