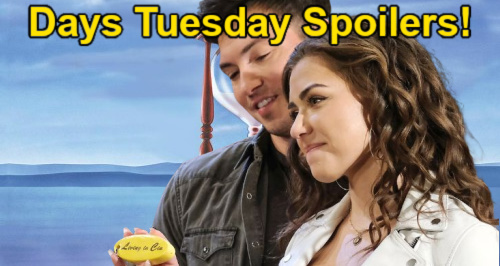 DOOL spoilers for Tuesday, June 28 reveal that Orpheus is still behind bars. However, the supervillain will make another appearance.

Orpheus shares some shocking news with Evan. Considering Orpheus will meet with Jan Spears (Heather Lindell) soon, this has to be about the baby.

It’s clear that the bombshell might be that Shawn Brady (Brandon Beemer) isn’t the father of Jan’s baby. Instead, Shawn Christian Brady could actually belong to Evan.

Sami has crash landed back in Salem and the drama is already kicked up a few notches. Lucas Horton (Bryan Dattilo) was able to cover when Sami interrupted his frenzied search for Abigail DiMera’s (Marci Miller) stolen jewelry.

Next on Sami’s agenda was to demand EJ DiMera (Dan Feuerriegel) sign divorce papers so she could marry Lucas. Despite EJ fighting Sami’s decision, she gets her way.

On Tuesday, June 28, Sami and Lucas will celebrate their engagement. However, there is a lot that Sami doesn’t know.

Of course, no wedding happens in Salem without drama or bombshells. The upcoming “Lumi” wedding will be no exception.

How will Sami react when she finds out the identity of her real kidnapper and Lucas’ part in framing EJ?

Days of Our Lives spoilers reveal that after Sami’s visit and divorce demand, EJ tries to lure Belle back to the bedroom.

However, Belle says no way and fires an accusation at EJ. Belle tells EJ that she’s being used to get back at Sami. Expect EJ to tell Belle that she’s doing the same thing with Shawn.

While EJ and Belle get into a war of words, the heated discussion will turn into a different kind of heat… in the bedroom!

Days of Our Lives Spoilers: Living in CIN

Ben and Ciara are close to leaving Salem. This time, it will be a joyful and heartwarming exit. Plus, Ben and Ciara will take their new baby, Bo Brady Weston (Cody and Warren Kransnow).

Ben and Ciara’s exit will be triggered by a very special gift from Hope Brady (Kristian Alfonso).

That gift is a boat much like “The Fancy Face.” For Ben and Ciara, their sailboat is named “Living in CIN.”

Even though many fans don’t want to see the couple go, at least they will be happy and sailing off into the sunset… literally.