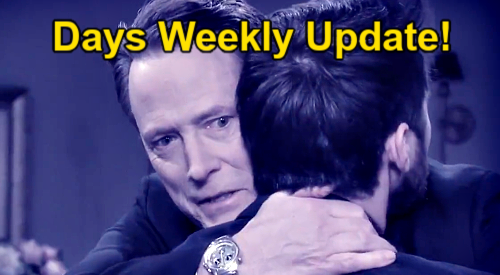 Expect Jack Deveraux (Matthew Ashford) to question Steve about the progress of that unofficial investigation.

In Tuesday’s episode, Orpheus will begin to put his scheme in motion.

Jan holds her baby for the first time while Shawn Brady (Brandon Beemer) gets a confusing phone call.

Days of Our Lives spoilers for Wednesday, July 6 reveal that Leo Stark (Greg Rikaart) has a run-in with Will.

Rafe finally makes an arrest in Abigail’s murder case but will it be the right suspect? The walls begin closing in on Jan while Ciara grills Shawn.

Days of Our Lives Spoilers for Thursday, July 7

Thursday’s episode will feature Jan luring Shawn to the docks. When Shawn arrives, Jan tells him about her big plan.

Meanwhile, Belle Brady (Martha Madison) finds herself pulled back to her husband.

While arguing with Nancy, Leo makes a revelation about Clyde. EJ makes an unexpected confession to Chad.

Expect Marlena to give EJ a warning about getting romantically involved with Belle. Ben and Ciara leave for their adventure.

Shawn and Belle have a heart-to-heart. Clyde swears to Ben that he’s innocent. Plus, Leo will get even more suspicious of Gwen when he visits her in jail.

During the week of July 4, fans can also expect Rafe to interrogate Nancy.