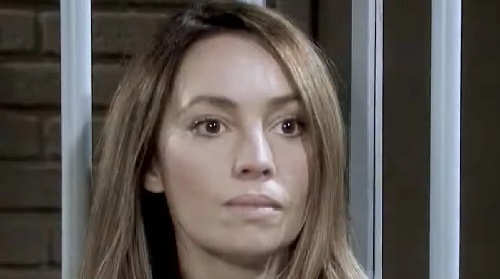 For starters, Days spoilers say Gwen will determine that Xander is lying about the job he’s landed. It’ll become clear to Gwen that Xander has reverted to his old sinister ways, so she may call him out.

Xander will end up making a confession to Gwen since he’ll be in over his head with Ava Vitali’s (Tamara Braun) twisted plot. Later, Ava will once again listen to that vision of Charlie Dale (Mike Manning) as things take an even more wicked turn.

On an undercover mission, Steve Johnson (Stephen Nichols) and Kayla Johnson (Mary Beth Evans) will try to get Tripp Johnson (Lucas Adams) out of a tricky situation. That’ll bring some fun moments as Kayla and Steve visit a dive bar for answers.

Elsewhere, Gabi Hernandez (Camila Banus) will spar with Stefan DiMera (Brandon Barash) over Gabi Chic and her desire to regain control of it. Stefan and Chloe Lane (Nadia Bjorlin) will also go public with their decision to date, so Gabi will have another reason to get upset.

As for Li Shin (Remington Hoffman), he’ll worry that Wendy Shin (Victoria Grace) is getting too close to the truth. Wendy will eventually face serious danger in Jakarta, where she’ll try to find Dr. Wilhelm Rolf (Richard Wharton) with Johnny DiMera (Carson Boatman).

Other Days spoilers say Leo Stark (Greg Rikaart) will lean on Sonny Kiriakis (Zach Tinker) for support following his work blunder, which allowed Sloan Petersen (Jessica Serfaty) to get the incriminating file back and leak it.

Sloan will ultimately drop another bomb on Paulina that’s related to that file, so she may reveal who the blackmailer is. Could it actually be Sloan herself? Sloan’s mystery client may not even exist if she stumbled across that information and just needed a ruse to hide behind.

While Chanel Dupree (Raven Bowens) deals with a legal mess, Allie will get some comfort from Alex. We may see Alex console Justin Kiriakis (Wally Kurth) too since Bonnie Kiriakis (Judi Evans) is about to go missing.

In the meantime, Alex will make progress in the romance department, so look for him to have some sizzling scenes with Stephanie Johnson (Abigail Klein).

Next, Days spoilers say Nicole Walker-Hernandez (Arianne Zucker) will inform Rafe Hernandez (Galen Gering) that she’s choosing Eric over him. Unfortunately, things will get complicated since it looks like Jada will be pregnant with Eric’s baby.

Rafe and Eric are going to battle some tension as the week of November 14-18 winds down, so stick with us for the hottest updates and news.