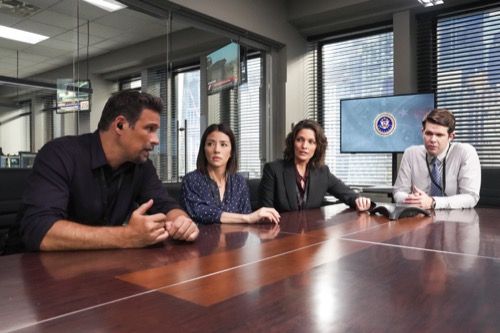 Tonight on CBS FBI  airs with an all-new Tuesday, September 27, 2022 season 5 episode 2, “Love is Blind,” and we have your FBI recap below. In tonight’s FBI season 5 episode 2 as per the CBS synopsis, “When an officer is shot dead at a pawn shop along with the store’s owner, the team tries to figure out why a young, recent Ivy League dropout is tied to the crime.”

In tonight’s FBI episode, there was a shooting at a pawn shop. Some guy wearing a balaclava mask had gone into a pawn shop and robbed the place, but not before shooting the owner of the store as well as a cop who had been in there. The cop was still alive when a witness went in to check on people inside. The cop told her to call 911. He, unfortunately, died before he could say anything else and it was the deaths of these two men that launched an FBI investigation. The FBI investigates bank heists or the thefts of financial institutions. Which is what the pawn shop was. The FBI, therefore, was running lead on this one and the first thing they wanted to know was why was Detective Villa there that day.

But Logan was innocent. Sure, he was a career criminal. He was also in the area and yet he wasn’t the guy. Logan was going to the pawn shop to sell more items when he saw the man with the mask running out. He even took a picture of the guy. He got an image of the car in the photo. The FBI used that to track down their shooter. He was still wearing the mask when the authorities caught up to him and he began firing at them in a bid to escape. This plan unfortunately did work out for the murderer. He had taken a shot at Nina. Nina’s coworker/boyfriend Stuart got worried about her safety and the hooded man escaped before anyone knew it.

Stuart knows taking his eyes off the killer was a stupid move. He wouldn’t have done it if it had been anyone else. Only it was Nina. Nina and Stuart have been together for months. They were growing strong and Stuart cared more about her than he did about getting the bad guy. The bad guy got away from him that time. Just not before the cameras picked on him taking off the hood. They ran facial recognition on the guy and he was identified as Devjeet Kamara. He doesn’t have a record. He was a straight-A student who got a full scholarship to Columbia where he ultimately dropped out. And so the FBI questioned his parents.

The parents said that Dev lost his way after he fell in love with an unsuitable girl. They were Sikh. She wasn’t. Dev cut off his hair to be with her and dropped out of college. The parents then cut him off. They hadn’t heard from him in months when out of nowhere he called them on the morning of the murders to ask for 40,000 dollars. His mother hung up on him. She refused to give him the money as long as he was still with the girl. The parents basically wrote off their son and praised their daughter. Their daughter became a doctor. She was still following her faith. She also wasn’t dating anyone “unsuitable”.

The sister knew Dev’s most recent address. The FBI later went there. They didn’t find Dev. They did find a bunch of pictures of him with his girlfriend and his girlfriend’s high school yearbook. Her name is Skylar Smith. She wasn’t in school that day. Her mother had no idea where she was and she said that Skylar borrowed her car. The FBI traced the car. They found it abandoned with blood on the widows. Security footage nearby showed that Skylar had been kidnapped. Two men grabbed her and threw in the back of a car. It would explain why Dev was so desperate to get money. He was trying to get enough for the ransom demand.

It also explained why a seemingly innocent young man would rob a pawn shop. Dev needed the money to get back his girl and so the FBI tried to help by locating Skylar. They tracked the car that took her back to a Las Espadas gangbanger. The guy was sporting the black eye that Skylar gave him. They pushed him into the kidnapping. He quickly confessed to everything in exchange for a lesser sentence. It turns out Dev was a drug dealer. The cops never checked the nerds, but the nerds didn’t have any street smarts. Dev thought the cops were following him and he flushed down 40,000 dollars worth of drugs thanks to that sense of paranoia.

The leader of the gang wanted that money back. He took Skylar as a means of forcing Dev’s hands and what he didn’t expect was that Dev would bluff his way into the building. Dev came in with a bag full of paper. Before the gangbanger knew it, he got shot. Dev killed the leader of Las Espadas. He got a shot in the gut in exchange and he got back his girl. He then went on the run with Skylar. They went to his parent’s place. They made his sister the doctor patch him up before going back out on the road. By this point, Skylar was still considered a victim. She wasn’t that anymore once she took the lead after her boyfriend was too injured to raise his gun.

When the FBI finally caught up with the couple, it was Skylar who took over with the gun. She began firing at the FBI agents and she also took a hostage. Skylar and Dev were held up in an auto repair shop with their victim. There were even more victims inside. Skylar was controlling them all with her gun. She didn’t want them arresting her boyfriend. She asked that they send in a paramedic. She saw that the paramedic was a woman and so Nina decided to pretend to be the paramedic in order to talk Skylar down. Stuart didn’t like that plan. He tried to talk OA into sending him in only Skylar had already clocked the paramedic was a woman.

Nina went in. She eventually tried to talk down Skylar. But Skylar wasn’t having any of it. She threatened to kill the hostages if Dev died and so she was spiraling out. Nina couldn’t wait anymore. She convinced Skylar to get Dev some water. She did this knowing that once Skylar was in position – the sniper would take the shot. Skylar was killed. Dev was rushed to surgery. And it looks like Dev is going to make it, but he probably won’t be happy about it.

Those kids made all the wrong choices and now they’ve thrown their lives away.

Love makes you do crazy things.