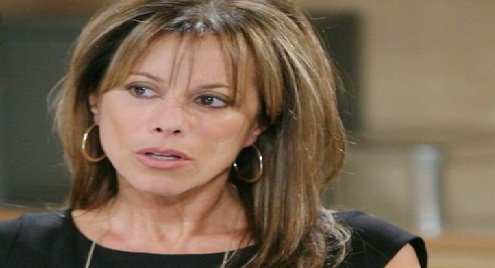 There was a time when it seemed like Alexis and Harmony Miller (Inga Cadranel) were poised to go beyond friendship. Harmony and Alexis got tons of scenes to strengthen their connection – far more than two pals would normally get.

Whether the show was ever going to take Alexis and Harmony in a romantic direction or not, it obviously didn’t pan out. In fact, GH writers destroyed that bond by having Harmony try to kill Alexis – and then Harmony herself ended up dead.

Now it sort of feels like all that buildup with Harmony was a waste of airtime. Alexis still needs a romantic option, so Gregory might be where her heart leads her next.

In the coming weeks, Alexis will throw herself into work again to deal with Harmony’s demise and all the messy emotions that came with it. Alexis still wants to make The Invader the best it can be, so she’ll focus on that and let the rest melt away.

However, love has a way of creeping up when you least expect it on a soap. During the week of May 23-27, Gregory will find a reason to clash with Alexis over The Invader.

Of course, it’s pretty common for two daytime drama lovebirds to start out by bickering. A feud often paves the way to reaching an understanding, which can set the stage for a new romance.

Could that be what GH writers have in mind for Alexis and Gregory? Alexis fell hard for Neil Byrne (Joe Flanigan) once upon a time – and Gregory is a similar type of academic guy.

That could also bring some fun complications with Finn and drag him into the story eventually. Even so, the heart wants what he wants! Alexis could wind up falling for Gregory, who might feel exactly the same way.

Once Nancy Lee Grahn is back onscreen, it may lead to some real Alexis and Gregory scenes for a chemistry test. Gregory and Alexis seem like they’d be a good match on paper, but we’ll see how it all plays out.