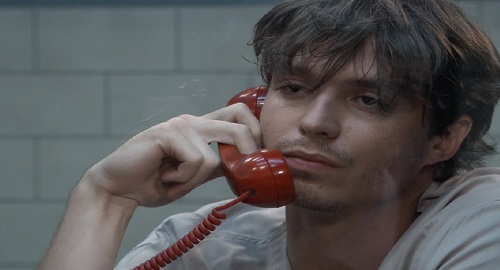 At Harrison Chase’s (Josh Swickard) place, Brook Lynn Quartermaine (Amanda Setton) came over to help him get ready for his big performance at The Savoy. Brook Lynn and Chase struggled to keep their mind on anything except each other, so they almost made it to the bedroom before BLQ pumped the brakes./02611

After Brook Lynn insisted Chase needed to put all this energy into his show, he got dressed and agreed to join her for breakfast.

Meanwhile, Valentin and Anna Devane (Finola Hughes) enjoyed the afterglow in bed, but Charlotte Cassadine’s (Amelia McLain) text about missing her papa left Valentin distraught. Anna reassured Valentin that they would bring Charlotte home and figure all this out together.

At GH, Nikolas Cassadine (Marcus Coloma) grabbed Hamilton Finn’s (Michael Easton) arm and warned that the doc had made a big mistake. Nik didn’t approve of Finn interfering in the whole alibi situation, but Finn felt that Elizabeth Baldwin (Rebecca Herbst) made her own choice to tell the truth.

After Nikolas suggested Finn was the reason Liz was so messed up, Finn flew into a rage and nearly attacked him. A brawl was about to break out before Alexis Davis (Nancy Lee Grahn) led Nikolas away and got him to stop making things more stressful since Diane Miller (Carolyn Hennesy) was still in surgery.

Nikolas hinted about taking Alexis’ advice and giving Ava Jerome Cassadine (Maura West) total power over him. Alexis argued that wasn’t the advice she gave at all, but Nikolas still felt he’d the best and only thing he could do.

There was also talk about Alexis’ op-ed, which highlighted how the community was standing against “The Hook.” Alexis hoped the baddie would answer her challenge and that their ego would be their downfall. Otherwise, Alexis might’ve poked the bear and invited more danger.

Over with Ava, she was about to be discharged and wanted to settle something with Liz first. Ava thanked Liz for the truth and hoped she was OK following her blackout. Liz acted like she just had a lot on her mind and offered a forced smile.

In the Pentonville visiting area, Spencer looked rough as he sat down for his visit with Victor Cassadine (Charles Shaughnessy). Victor grew concerned as Spencer talked about the other inmates knowing he was a rich boy under protection and basically targeting him through psychological warfare instead.

After Spencer asked about Ava, he admitted it was because Trina Robinson (Tabyana Ali) cared about her. Spencer didn’t want to discuss Nikolas – though he admitted the old version of his father wouldn’t have listened when he warned him not to come.

Victor offered to get a message to Trina if Spencer wanted, but he declined the offer. Spencer also urged Victor not to intervene in his difficult prison situation and told him not to waste his breath talking to Nikolas.

Even so, Victor found Nikolas later and mentioned that he just came from visiting Spencer. Although Nikolas didn’t think Spencer wanted to see him, Victor thought it was time for Nik to step up as a father.

At the Metro Court, Nina spoke to Sonny Corinthos (Maurice Benard) about Alexis’ op-ed and wondered if he knew who was behind the attacks. Sonny said he was working on it and sidestepped questions about Michael Corinthos’ (Chad Duell) visit to Pozzulo’s last night.

After Nina and Sonny discussed being there for Sasha Gilmore (Sofia Mattsson), Nina said she was still hoping to convince Ava to come home with her. Selina Wu (Lydia Look) appeared while Sonny and Nina were in a lovey-dovey moment, so she greeted them before Nina took off.

That gave Selina a chance to address the hook attacks and how they seemed to be linked to Sonny. Selina knew that could be bad for business and assured Sonny that her resources remained at his disposal.

Once Selina brought up her imminent poker game, she offered Sonny a seat at the table. Sonny passed on that, but he was tempted to come see Chase’s performance later.

Soon after, Chase caught up with Sonny and said he wanted to thank Nina for putting in a good word for him with Curtis Ashford (Donnell Turner). Sonny flashed back to an earlier conversation with Selina and realized she was behind this performance instead.

At a nearby table, Nina spoke to Valentin and Anna as she realized they were official now. Once Nina talked about missing Charlotte, she hoped Valentin would tell his daughter to give her a ring.

After Nina left, Valentin realized she could be the answer to their Victor problem. Although Anna was wary of bringing another civilian into their plan, Valentin thought Nina could be the key and help them gain access.

Back with Liz, she was fixated on her flashbacks when she bumped into Gregory. That led to Elizabeth asking how well Gregory knew Reiko Finn (Mele Ihara).

Over with Finn, he tracked down Alexis so that he could offer news on Diane.

Nina also made another pitch to Ava about staying at her place instead of Wyndemere. Nikolas said they’d go home together, but Ava ultimately decided she wasn’t ready and went home with Nina instead.

At Pentonville again, another inmate approached Spencer during his library work assignment. After the other prisoner knocked a book out of Spencer’s hand, he eventually escalated the situation by delivering a blow to Spencer’s head.

Unfortunately, Spencer wound up unconscious on the floor in the aftermath! As other GH updates emerge, we’ll keep you posted.