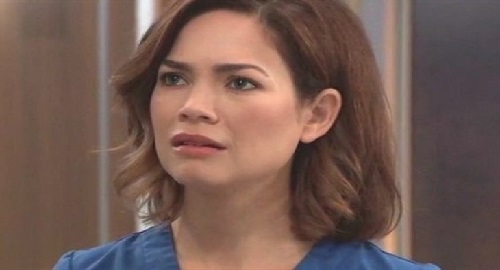 On soaps, viewers are usually pretty willing to suspend disbelief and accept a lot of twists. However, it can get frustrating when the writers try to tell us we didn’t see what we already saw!

Finn’s story has always been that he inadvertently exposed Reiko to Blackwood’s syndrome during his research, so that added to his guilt over not being able to save her.

Now the story has changed since Liz caused Reiko’s fall, which led to a blood transfusion that caused her to contract the disease instead. Of course, the writers are also using this to try and give Liz’s terrible parents a pass for abandoning her.

Jeff Webber (William Moses) and Carolyn Webber (Denise Crosby) essentially brainwashed Liz into forgetting and shipped her off – hoping everything that happened would stay buried. It’s ridiculous that everything is getting twisted around to be Liz’s fault.

In fact, you could argue that Reiko caused her own fall since she was trying to stop Liz from spilling the affair beans when they struggled. Even so, Liz will battle guilt and will come clean to Finn about what really happened on the Mariana Islands.

Fortunately, we know Finn is a pretty understanding guy – especially since he had a similar situation happen with Peter August (Wes Ramsey) in the stairwell. Finn will inevitably try to help Elizabeth see that she’s not a killer.

Liz didn’t mean for Reiko to fall – nor did she mean for her to contract a fatal disease. Things happened that were beyond Liz’s control, so hopefully Finn can offer reassurance once he gets past the shock.

Nevertheless, this messy storyline feels like one big disaster. There are way too many coincidental connections since Finn’s wife hooked up with Liz’s dad before Finn fell for two of Jeff’s daughters – not to mention Violet Finn (Jophielle Love) is Jeff’s grandchild through Hayden Barnes (Rebecca Budig)!