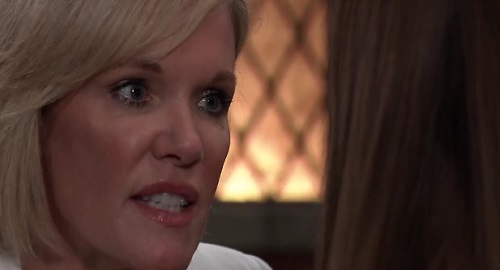 First, Brook Lynn Quartermaine (Amanda Setton) will realize she’ll have to shift her strategy. Dante Falconeri (Dominic Zamprgona) could tell Brook Lynn was running a con – and now Linc Brown (Dan Buran) himself is catching on.

Brook Lynn needs to do something unexpected to throw Linc off his game, so she’ll suggest calling off the competition to be Harrison Chase’s (Josh Swickard) management. Once Brook Lynn works this new angle, Linc may decide he was wrong about her agenda.

Over with Cody Bell (Josh Kelly), he’ll interrupt Damian Spinelli’s (Bradford Anderson) attempt to steer Britt Westbourne (Kelly Thiebaud) away from another date. Cody will think they might as well put their cards on the table, but Spinelli won’t want his own Society Setups secret to be revealed.

The threat of exposure may be enough to make Spinelli cover with a little help from Cody and whatever story he comes up with. Britt would be seriously turned off if she knew Cody rigged their love match, so it’ll be in his best interest to keep that quiet.

Meanwhile, Maxie Jones (Kirsten Storms) and Sam McCall (Kelly Monaco) will try to pry information out of each other. Sam may be curious why Maxie’s become so invested in Britt and Cody’s love lives, but Maxie is a romantic at heart!

It looks like Maxie will question Sam about her own love life as well. Dante suggested living together, so Maxie should quiz Sam about what she wants and wonder why she’s dragging her feet.

At GH, Willow will apparently be back on the job. That may not be the best idea considering Willow’s health crisis, but she’ll act like she’s fine and keep up appearances – especially for Michael’s sake.

When Ava shows up and strikes up a conversation, Willow will get the feeling that she wants something from her.

Ava may worry that an injured Esme Prince (Avery Kristen Pohl) might’ve been brought in – or maybe this will be about comatose Oz Haggerty (Max Faugno), the key witness in Trina Robinson’s (Tabyana Ali) case.

Although Ava turned to Sonny for help fixing Trina’s verdict, she might still be curious about Oz’s fate and the impact on the trial. Regardless, Ava will seemingly end up on a fishing expedition that leaves Willow suspicious.

At Charlie’s Pub, Sonny will hang out with Kristina and congratulate her on something. Kristina will celebrate a milestone, but she may carry some lingering guilt over Sonny’s failed marriage.

Since Kristina told Sonny that Carly wasn’t coming to The Haunted Star, he landed in bed with Nina Reeves (Cynthia Watros). Carly showed up and spotted the two of them under the sheets, which really sealed the deal on her divorce.

If Kristina still feels bad about how all that went down, Sonny may urge her not to blame herself. We’ll see Sonny talk about making choices and having to live by them, so he may insist he’s the one at fault.

As for Nina, she’ll meet with a celebrity chef and hope to hire her at the Metro Court. Jamika Pessoa will play herself as Nina makes a pitch regarding a fabulous new position.

Later, Liesl Obrecht (Kathleen Gati) will arrive with a special present for Nina. It’ll be a gift that Liesl wants to deliver in person, so we’ll see what she’s got up her sleeve.

In a car elsewhere, Michael will object to the plan Dex has in mind. Dex will argue that he just gave Michael the perfect opportunity to nail his old man, but Michael will be reluctant.

If Dex wants to take Sonny down for jury tampering, Michael may nix it because of Trina. Since Trina is Josslyn Jacks’ (Eden McCoy) best friend and Sonny is actually trying to help her, Michael may warn they need another tactic – one that won’t harm Trina in any way.