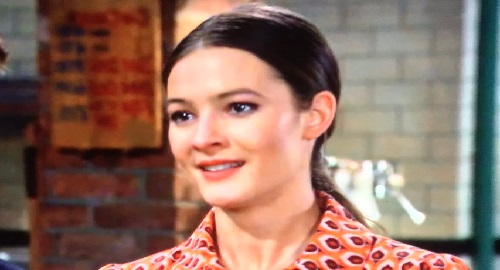 At the school fair, Leo Quartermaine (Easton Rocket Sweda) will prepare to recite his poem, but he’ll need a last-minute pep talk from Harrison Chase (Josh Swickard). Chase will get Leo excited about doing his part as they strike a deal ahead of the performance.

Unfortunately, Ned will seethe when he gets offered the COO position like some sort of consolation prize. That’s not going to work for Ned at all, so he’ll be vulnerable to Valentin Cassadine’s (James Patrick Stuart) attempt to pit him against his family.

Over with Stella, she’ll decide she owes Curtis the truth. GH spoilers say Stella will come clean about what she knew and when she knew it, so Curtis will find out his auntie has been lying to him about Marshall Ashford (Robert Gossett) for years.

Curtis will want to know why and will understandably lash out over Stella’s deception. This may tie in with why Marshall did that mental institution stint, so Stella will do her best to help Curtis wrap his head around the situation.

Next, Esme will tell Spencer Cassadine (Nicholas Chavez) that she’s got a giant surprise, so she may hope she can make a grand gesture of her own and jumpstart things in the bedroom.

However, Esme’s going to strike out with Spencer and feel distant from him once again. That’ll set the stage for Esme to lean on Nikolas Cassadine (Marcus Coloma) for support and pile on the manipulation.

Of course, Ava will think Trina has more than enough to worry about, so she’ll urge Trina to let her worry about her relationship instead. Ava will insist that dealing with Nikolas is her job and will push Trina to focus on herself right now.

Finally, Dante will meet up with Sonny and sound the alarm about the war Michael’s ready for. Based on what Dante says, Sonny will wonder if it’s code for him to watch his back!