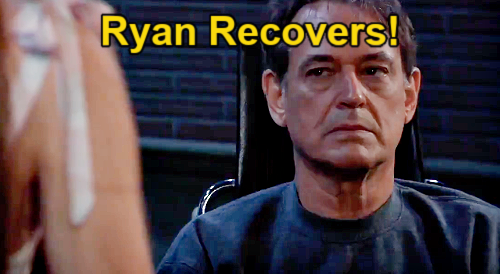 General Hospital (GH) spoilers tease that Ryan Chamberlain’s (Jon Lindstrom) status change will rattle Kevin Collins (Jon Lindstrom), so that could mean his sudden locked-in syndrome recovery will spell trouble. Kevin will get some news that troubles him, so let’s talk about what’s coming up.

During the week of March 7-11, Kevin will receive updates on Ryan’s status at Spring Ridge.

Kevin will grow concerned based on what he hears, so it makes sense that this will involve some improvements in Ryan’s condition.

If Ryan were to escape, that’d bring total panic – not just for Kevin, but for all of Port Charles.

The fact that Kevin will be uneasy rather than terrified presumably means Ryan will still be in prison.

However, Kevin and plenty of other PC residents have enjoyed some peace of mind because of Ryan’s locked-in syndrome.

They’ve been lulled into a false sense of security since Ryan is actually faking his condition to some degree.

GH viewers have seen Ryan smirk in satisfaction on more than one occasion, so he’s not as locked in as he’d have everyone believe!

Even so, we have to wonder why Ryan might drop the act and pretend he’s getting better after all this time.

Perhaps it has something to do with Esme Prince’s (Avery Kristen Pohl) access being restricted.

Ryan could make it look like Esme’s visits have been helping him get motivated.

Ryan might even be able to write something out or say something to indicate that.

Then again, maybe Ryan will simply start moving forward with the escape plan he’s had all along.

Ryan obviously wanted to land at a facility with less security, but he doesn’t want to stay there forever.

Ryan would much rather wreak deadly havoc on Port Charles, so he might figure he can score a transfer if he improves enough.

As we saw with Peter August (Wes Ramsey), it’s easy for a soap prisoner to plot an escape during transport – and Esme could definitely come through as an escape partner.

General Hospital spoilers say Kevin will investigate Ryan’s status change and try to get to the bottom of his brother’s true condition.

CDL’s where you want to be for fantastic General Hospital spoilers, news and updates, so make us your top source.