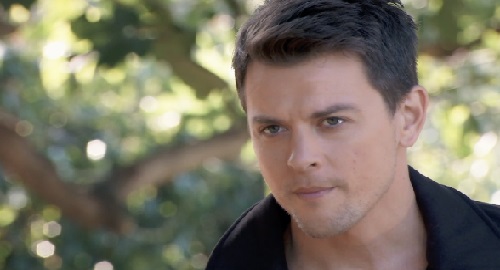 First, Britt Westbourne (Kelly Thiebaud) will seek answers from Sam McCall (Kelly Monaco), who agreed to look into the origin of Peter August’s (Wes Ramsey) necklace. Although Sam won’t have all the information she needs yet, she’ll spill what she’s uncovered so far.

Over with Elizabeth Baldwin (Rebecca Herbst), she’ll admit she now knows what happened on those stairs. Liz will come clean about confronting Jeff Webber (William Moses) and Carolyn Webber (Denise Crosby), so that’ll lead to the shocking story of how Reiko Finn (Mele Ihara) died.

Elizabeth will fill Finn in on her fight with Reiko and the tumble that led to her blood transfusion – the one that caused her to contract Blackwood’s syndrome. GH spoilers say Liz will break down as she tells Finn the truth and insists Reiko’s death was her fault.

At the hospital, Willow Tait (Katelyn MacMullen) will try to wrap her head around Terry Randolph’s (Cassandra James) latest news. Unfortunately, Willow’s leukemia is now in stage 4, so things are even worse than she thought.

Willow will worry she waited too long to pursue treatment, but TJ Ashford (Tajh Bellow) may remind her that she made a choice to protect her baby. Although TJ was concerned about that choice, he can respect it and may suggest they need to focus on what they’re going to do moving forward.

Meanwhile, Michael will continue to demand answers since he caught Sonny trying to silence Nina Reeves (Cynthia Watros) about something related to him. Of course, viewers know this is about Nina’s affair suspicions regarding Willow and TJ.

It looks like Michael will ultimately realize Nina’s accusing Willow of cheating. Michael will end up clashing with Sonny over this, but Sonny will warn his son to be very careful of what he’s about to say next.

When it comes to Nina, Sonny is growing increasingly protective – and that means he’ll want Michael to think twice before he drags Nina’s name through the mud again!

Michael will head to the hospital soon after, so he’ll catch Willow and TJ in a close moment. Once Michael demands to know what’s going on, Willow will prepare to come clean about her heartbreaking diagnosis.

Next, Scott Baldwin (Kin Shriner) will have a run-in with someone from his past, so that’ll probably involve a tense interaction with Heather.

As for Valentin Cassadine (James Patrick Stuart), he’ll make a phone call and give the green light to someone. Valentin will think they have to act now for Anna Devane’s (Finola Hughes) sake.

The guard just told Anna she isn’t going to Pentonville, so he seems to be in on an escape plot. Unfortunately, Anna will apparently land on the same transport van as Heather, so that could give Heather an opportunity to escape, too.

Heather will suggest they’ll have time to catch up, but it probably won’t be long until this transport is derailed – leaving both Anna and Heather free for the time being.

Esme is also working on scoring her freedom, so she’ll try to make her way down to safety using those blankets she’s tied together. Nikolas will face a terrible surprise later, so that could mean he’ll find that Esme is gone!

However, we know Nikolas will manage to track Esme down in the not-too-distant future, so any victory she achieves will be short-lived. As other GH info becomes available, we’ll bring you updates.