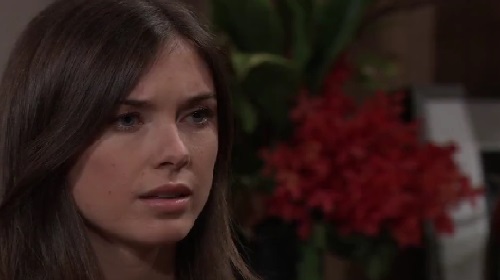 GH spoilers for the week of November 7 reveal that Willow meets with Terry Randolph (Cassandra James). Willow chose to delay treatment and not tell anyone about her diagnosis. Willow’s intention was to protect her unborn child. However, Terry and Britt Westbourne’s (Kelly Thiebaud) warning about delaying treatment will now ring true.

In the weekly preview clip, Willow learns that her cancer is now in stage four. This is devastating and grave news.

Willow isn’t alone when meeting with Terry, though. TJ Ashford (Tajh Bellow) is there for support. After meeting with Terry, Willow tells TJ that she is scared. Breaking down in tears, TJ embraces Willow. Of course, this is most likely seen by Nina, who decides to take action.

General Hospital spoilers for the week of November 7 reveal that Nina will tell Sonny about her suspicions. Instead of minding her own business, Nina tells Sonny that she believes Willow is having an affair with TJ. Nina must be determined to expose Willow’s “affair” to Michael. As Michael walks up, Sonny firmly tells Nina that Willow’s husband doesn’t need to know anything.

Of course, Nina will probably blurt out that Willow is having an affair with TJ. Michael won’t waste any time to get to the truth. In the preview clip, Michael confronts TJ and Willow. Michael demands to know what is going on.

However, when Michael discovers the heartbreaking truth, how will Nina react? Nina can be filled with guilt, but that doesn’t mean she will be able to make amends. Especially after everything that’s happened with the character.

It is teased that Nina will open up to Ava about the Willow situation. Ava is usually understanding of Nina. However, this time, Ava feels that Nina went too far. Consumed with anger, Ava tells Nina that she just couldn’t wait to stir the pot. Nina has a sheepish look on her face.

So, it’s clear that Nina feels awful about her mistake. At the same time, Nina always feels bad but all of her attempts to make things right backfire. So, what is going to happen now? Fans will just have to keep watching the ABC soap to find out.

Be sure to catch up on everything happening with GH right now. Come back often for General Hospital spoilers, news, and updates.

“You couldn’t wait to stir that pot.” #GH pic.twitter.com/5HC0WFDNQi