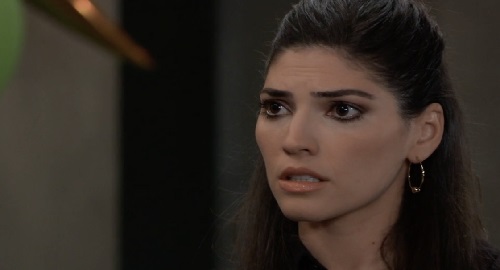 At the Metro Court Gardens, Harrison Chase (Josh Swickard) remembered Linc as Brook Lynn’s sleazy ex-music producer. Linc insisted they had unfinished business and declared that all Brook Lynn’s songs belonged to him.

After Linc told Brook Lynn to check her old contract, he pointed out that he’d been shopping her songs around. Linc suggested Brook Lynn should re-sign with him and find out about the new talent who was interested in recording her work.

Brook Lynn refused to work with Linc again, but he invited her up to his room to explore more. After Chase clenched his fist, Brook Lynn punched Linc first.

Linc urged Brook Lynn to call him once she’d cooled off and then sauntered away. Once Chase admitted Brook Lynn beat him to the punch, she admitted she did it intentionally to keep him out of trouble.

Chase ultimately agreed that he couldn’t blow things this close to being reinstated at the PCPD. Although Chase wanted to help Brook Lynn ice down her hand, she pulled away rattled and took off alone.

At GH, Portia Robinson (Brook Kerr) told Curtis Ashford (Donnell Turner) about Trina Robinson’s (Tabyana Ali) potential expulsion and the hearing happening in 10 days. After Curtis talked about Stella Henry (Vernee Watson) and his mom being in on Marshall Ashford’s (Robert Gossett) deception, Portia made excuses for them.

Portia also reflected on how secrets could get away from you and make it so you have no idea how to make things right. Although Curtis was wary of leaving Portia and Trina right now, Portia felt he should go find Marshall.

Jordan Ashford (Tanisha Harper) popped up to reveal that TJ Ashford (Tajh Bellow) was in Brooklyn following a lead with Molly Lansing-Davis (Haley Pullos). After talking to TJ over the phone, Curtis decided he’d take a trip to Brooklyn and help.

Jordan had an odd look and chose to hang around until Curtis departed. After Jordan talked about how protective Curtis was of Portia and Trina, she said Curtis seemed to have the family he’d yearned for as a child.

In Brooklyn, TJ and Molly met with the music shop owner at a restaurant. After TJ bought the guy dinner, he showed him the clarinet and the note that his grandfather had left him.

It took some convincing, but the shop owner admitted he knew Marshall and agreed to spread the word to see if he was around.

Once TJ and Molly were alone, they decided to hit a jazz bar and thought it’d be great if they ran into Marshall playing at a club. Suddenly, Marshall walked through the door looking livid.

While Brando and Sonny Corinthos (Maurice Benard) worked on Sonny’s car in the garage, they talked about Michael Corinthos (Chad Duell) and his takedown plan. Brando truly hoped they could patch things up and felt it’d be a shame if Michael didn’t have Sonny in his life.

Next, Gladys Corbin (Bonnie Burroughs) pushed Sasha to admit she was back on pills and asked if she was high when she hit Harmony Miller (Inga Cadranel).

Sasha swore on her son that she didn’t take any pills before the accident – though she did admit to needing drug help for the IPO launch and to get through her grieving ordeal. Gladys wanted to tell Brando, but Sasha insisted she’d had a wakeup call and that the crisis had been averted.

Sasha didn’t want to burden Brando and understood she had too much to lose to be on drugs again. After Sasha said she was strong enough to handle this, she wondered what she could do to convince Gladys. Sasha told Gladys to just name it and she would do it.

Later, Sasha showed up at the garage with Gladys. Brando was stunned when Sasha revealed that Gladys would be moving in – and Sonny certainly looked surprised over the news as well!