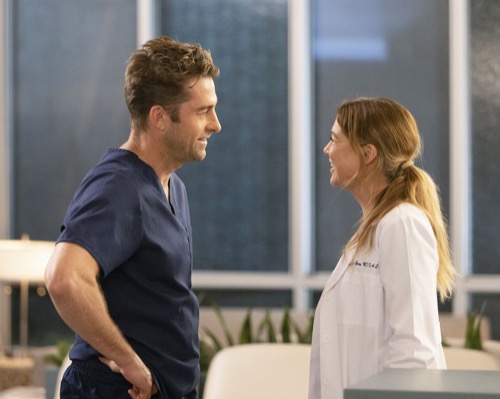 Tonight’s episode begins at the board of Grey Sloane Memorial held a conference after what happened with Schmitt. Schmitt accidentally killed a patient when he made a mistake during surgery and the mistake would never have happened if Schmitt had waited for an attendee like he was supposed to. Schmitt had been confident. Perhaps too confident. He went ahead because he thought he was ready to handle such a surgery. He wasn’t and the patient died. The death of that person plagues Schmitt. He scrubbed his hands until they bled because he hadn’t been in the right frame of mind since the surgery and so he was in no way prepared to do a conference on it. And he was forced to hold one anyway to discuss what he did wrong in that surgery.

The conference was on mortality. Schmitt had to stand up in front of the other residents and the department heads to talk about the surgery and what went wrong. The other residents were even told they had to ask questions. They also couldn’t ask soft questions because Bailey wanted them to push back against Schmitt and so Schmitt eventually rushed out of there because he was on the brink of having an anxiety attack. In his absence, Richard was made to answer questions. He received pushback from department heads who were against the Webber Method and wanted to do away with it.

Maggie was one of those people. She had wanted to talk to Richard before the conference and he told her to save it for the conference and so she went after him at the conference. She pushed him about how the residents weren’t ready. She said that department heads should be allowing people to have surgeries. Dr. Lin agreed with her. They went after the Webber Method and they called for it to be disbanded which riled up the residents. The residents enjoyed the experience of performing surgery. They felt ready for it and they finally felt excited again. After everything they went through with the pandemic, the residents were finally beginning to feel alive again.

It was a shame that the doctors wanted to take that away. They didn’t see the good that came from resident study and they wanted to stifle them. The conference went down a rabbit hole after that. If Meredith had been there, she would have spoken up for Richard. She would have defended him against the others and the only reason she wasn’t here is that Bailey asked her to perform surgery. The hospital was down a resident what with Schmitt being suspended. They were also down several attendees because Owen was still recovering from his accident and Hayes had quit his job

Hayes was returning to Ireland where he wouldn’t be in position to blow Owen’s secret. Owen was secretly helping veterans die and it would cost him his medical license as well as a possible sentence for assisted suicide. It could also cost the license of everyone who knew about it but didn’t report it. Hayes didn’t want to report Owen. He also didn’t want to risk his career. He was going back to Ireland where it will be safe and he said goodbye to Meredith before he left. She helped him to see that there was life after his late wife’s passing. Hayes believes in love again. And while it didn’t work out with Meredith, he knows that there was still a chance for him even after everything that happened.

Hayes had become a friend to everyone. Meredith was going to miss him and Teddy desperately wanted to talk to him. Teddy knows something happened in that car that she’s unsure of. She asked Owen about it and he refuses to discuss it with her. He said he loves her. He said what happened doesn’t matter and he wants to leave it at that. Hayes also refuses to talk about it. He left the hospital with the secret and so Teddy talked to Meghan because maybe Meghan knows as Owen’s sister. And she didn’t. Meghan has no idea what Owen said right before he thought he was going to die and she doesn’t need to know.

Meghan said Owen was selfless. Even if he wanted to keep secrets, it wasn’t anything bad and they didn’t need to worry about it. But things were tense following that conference. Richard hadn’t wanted to talk to anyone at first and Meredith working with Maggie and Amelia got him to open up. They told him that they approved of the method. Or at least that’s how Meredith and Amelia felt. Maggie hadn’t liked it and she hated that it was enacted while she was gone taking care of her father. Only they all love Richard. They were the biggest supporters and that wasn’t going to stop even if the Webber Method goes away.

Richard had needed to hear that. It was good having Amelia and Meredith back. Amelia and Maggie were introduced to Nick later and they suddenly saw the appeal of Minnesota. And Richard and Bailey talked. Bailey realized that she should have said something sooner about the Webber Method and she didn’t because it was Richard. Richard in turn apologized for getting his wife to overrule her which wasn’t fair.

Bailey came to light about her own stance after talking to Hellmouth. Hellmouth had also lost a patient and she lost a best friend too. Schmitt was refusing to return to the hospital. He even broke up with his boyfriend. Schmitt was just set on falling apart.

And Teddy saw Owen give his car keys to someone so she followed that person to find out Owen’s secret.

But Jo chose to stop sleeping with Link because she’s developed feelings for him and she couldn’t feel something for him while not telling him how she felt.