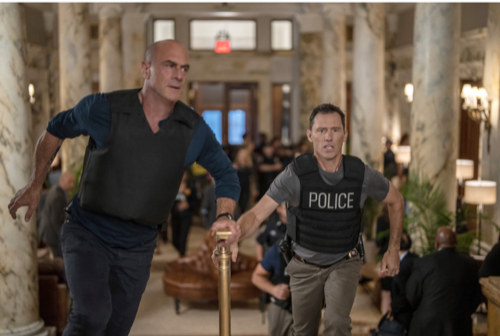 On tonight’s Law & Order Organized Crime premiere, the world was currently on fire. There was so much that was happening and so much that people threatened to do that there was no other way to describe the situation other than being on fire. Even Detective Cosgrove’s kids are scared. They wanted to be homeschooled. They tried to convince him of it and he wasn’t having it. He felt they needed to socialize. He felt they needed traditional school. He didn’t want them worrying about the future, but the future was bleak and they have a right to be scared. Cosgrove was having lunch with his teenage daughter when he spotted another teenager running while covered in blood.

He told his daughter to stay put. He pursued the girl. She got hit by a car and she had been scared of him when she woke up on the street, but he showed her his badge. That seemed to calm her. Cosgrove left her for a minute to clear traffic and unfortunately someone used that timeframe to shoot and kill the girl. The guy got away before Cosgrove was able to get him. Cosgrove then blamed himself for what happened. The girl was right in front of him and, if he hadn’t had left her side, she would still be alive. Cosgrove still called it in.

Cosgrove asked to be assigned the case. He had been the first on the scene. He had developed a brief rapport with the girl and he wanted to see it through. The local homicide cops understood. Cosgrove’s boss understood. He got the case and all he had to do in exchange was work with a new guy. The new guy was Detective Jalen Shaw. He was formerly Narcotics. He just transferred to Homicide and so this case was a first for him. It was a first in a lot of ways. It was the first time he had to give notification to the relatives of someone passing. Cosgrove had identified the girl and so all they had to do was tell her aunt about it.

The poor aunt. She thought her niece was simply out with friends and that she would come home soon. She never expected to get one of those notifications. She was so angry that she slapped Shaw. She didn’t mean to do it. It was something done in the heat of the moment and she was apologetic about it once she returned to her normal faculties. It seems the aunt blamed the police for her niece dying. Her niece escaped the war in Ukraine after her whole family was killed. She came to the states to start over and it all looked so fun and carefree. The aunt tried to warn her, but the niece left one day and never came back.

The aunt filed a missing person’s report. The cops didn’t do anything because it was a teenage runaway. They tend to think the kids will come home on their own once they realize the streets aren’t that fun and yet that didn’t happen in this case. The girl didn’t come home. She was instead hunted and murdered. Ava never lived to adulthood. She never got to make mistakes and be able to joke about them. She instead got mixed up with some Eastern Europeans who rented a yacht through a shell company with ties to Chechnya. And so the leading theory in this investigation was that she got honey trapped.

Ava probably met a young guy who said all the right things. He convinces her to leave home. Everything is all well and good for the first couple of days and they he comes with an idea of how they get the money they need for a dream life. Before she knows it, she’s getting pimped out with no way out. Ava’s remains showed sexual trauma. She was most likely sex trafficked like a lot of young girls and her story differs because she tried to escape. She tried to run. She fought back. She made it all way until she got hit by that car. It sadly slowed her down long enough for her killer to catch up to her. And that’s how she died.

The detective traced Ava’s lost moment back to the yacht. They tracked down who used the yacht and Cosgrove got a little too free with his hands. He suspected a known gang member like Mark Sirenko had killed Ava. He got in Sirenko’s face. He threatened to come after him with everything he got and he got into some trouble over it. Sirenko was under investigation. Organized Crime was looking into him. They were building a month long investigation into his gang activity and now that was at risk because Sirenko knows the police are looking at him. He’ll probably move a few things around.

He’ll probably call a halt to his illegal activity until this all blows over. Cosgrove’s actions risked Detective Stabler’s case. He was all angry and upset in his usual Stabler way. Stabler tried to tell Cosgrove to back off. Cosgrove wasn’t having it. Cosgrove thought his murder case trumped their organized crime case. Sergeant Bell told her people they had the lead. Stabler decided to ignore the other problems and tried to find out who killed a fifteen year old girl. He asked a criminal informant to clone Sirenko’s phone. But the guy he asked to do the job was a bit too obvious. He got caught. Stabler had to go into the club after him.

Stabler almost blew his informant’s cover by doing so yet the informant got what he wanted. He cloned Sirenko’s phone. He was able to smooth talk his way out of trouble and so his cover is still good. Stabler at least got what he wanted with minimal loss of life. He was able to hand over the cloning device to his fellow officer and resident tech expert Jet. Jet found out that Sirenko had surveillance cameras on the yacht that was directly feeding into his burner. They got video of him and another man on the boat with both Ava as well as a girl who looked even younger than Ava. And remember Ava was fifteen.

Finding the other girl who could be a potential witness was easy once they identified her pimp. The pimp wasn’t a man. It was actually a woman. And she was arrested along with the other girl because they both tried to attack the cops when the cops broke down the door.