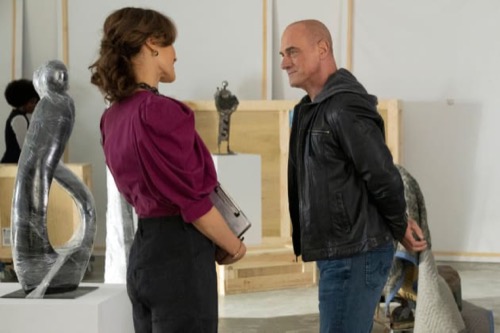 Undercover, Elliot has to defend himself against the dirty cops he has befriended. He tells them how he handled the Santos situation and how it was right. Frank jumps in to defend him. He then makes Elliot his No. 2 guy.

Frank and Elliot are called to meet some criminals Frank is in cohorts with. A man named Preston is angry he has had some crates of guns stolen from him. Elliot steps up and says they can help for a price. Frank doesn’t like him speaking as a lead but agrees.

Bell questions a suspect named Jesse about some stolen guns and his brotherhood. She can cut him a deal if he talks. Later, Elliot gets Bell up to speed on missing guns. After, he meets with the wife of the criminal Preston he is helping. She tells him she doesn’t get involved with her husband’s dealings. She is flirty with him.

Frank and Elliot visit a suspect who may have stolen the crate. The man is angry when they start breaking his things. Back at home, Elliot gets into a fight with his son. He wants to know why his dad has a new tattoo and why he was moved to a different unit. Elliot is mum. His son storms off. Elliot then gets into it with his mom.

Elliot and Frank are on a stakeout. They talk about families and being a cop. They then bust into a home of a suspect who may know something about the guns. He is in bed with his lady. They play good cop, bad cop.

Elliot visits a storage locker and goes through old photos and trophies as he works out what kind of cop his dad was. Later, he asks a coworker to help him transfer some Super 8 family footage he has for Eli.

Bell and Elliot talk about their suspect Jesse. He is going to throw his whole life away because he won’t talk. Elliot talks to Jesse alone. He tells him to protect his family. Give Bell something and get out of there. After, Elliot tells Bell that he put a bug in Jesse’s ear to try and change his mind.

Elliot meets with a man at a warehouse. He is mad Frank isn’t there. He is volatile and pulls a gun. They fight. Bell arrives with the team just in time after Elliot wrestles with the man over the gun. They get the guns.

Elliot heads to meet Frank. He meets his wife at the door instead and she is in labor. He brings her to the hospital. Frank meets them at the hospital after. He makes it for the birth. He and Elliot share a cigar. Frank admits he was with his side lady. Elliot then takes a call from Bell who has found a body in a graveyard. Frank is responsible as the tip came from Jesse. Elliot pretends the call was from his son.

Elliot meets with Preston and tells him he doesn’t have his guns. He may have a rat. He gives him a box filled with something that makes him happy. Preston and his wife talk. Elliot found a piece of artwork she wanted. She thinks they shouldn’t deal with Frank anymore. He isn’t reliable.

Elliot heads home and watches home videos. His mom finds him and sees the videos, giving him a hug. He smiles.