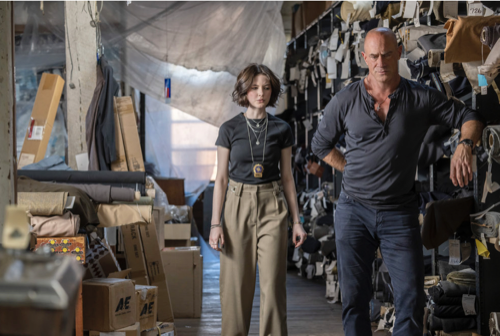 Tonight on NBC Law & Order returns with an all-new Thursday, September 22, 2022 episode and we have your Law & Order recap below. In tonight’s Law & Order season 22 episode 1 “Gimme Shelter – Part Three,” as per the NBC synopsis, “A young girl is shot and Cosgrove teams with Det. Jalen Shaw to track down her killer.

Benson and Stabler assist and realize it’s more than a typical homicide. McCoy and Price seek justice against an international crime ring, but complications threaten the case.”

Tonight’s Law & Order season 22 episode 1 premiere looks like it is going to be great and you won’t want to miss it.

In tonight’s Law & Order premiere episode, Mark Sirenko was facing murder charges as well as terrorism charges. He blew up a building that was filled with U.N. dignitaries. He also killed two people before he blew the building and he killed three people by actually blowing up the building. Everyone thought the building had been cleared. But they had been wrong. The cadaver dogs found the victims and will probably find more. It wasn’t looking good for Sirenko. The only thing the authorities couldn’t figure out was why Sirenko did it. Sirenko wasn’t Russian. He was Chechen. He had no reason to blow up people who wanted to intervene in the war in Ukraine.

Sirenko wasn’t the mastermind behind everything. His first murder. The one in which he killed a teenage girl that he was trafficking had been instigated by someone else and that someone else turned out to be Daniel Rublev. Rublev was identified by the other teenage that was being trafficked when they met. Only Rublev wasn’t Russian either. He was however a great friend of Putin’s. Something that didn’t look too good since he also instigated the bombing of a New York hotel. Rublev could either have wanted to curry favor with Putin or Putin gave him a direct order to do this.

There was at least three police units working on the case either way. There was Homicide, Organized Crime, and Special Victims unit. They looked into Rublev’s movements. They connected him to Sirenko. They just needed to connect him to the bombing and they had thanks to the late Ava. Ava had been sold into a sex ring, but she was sport enough to film Rublev with a camera. He found out about it. He attacked her. She fought back. She then escaped. Albeit without her phone. Rublev sent Sirenko after her and Sirenko later killed her. And so Ava’s phone was the only way to connect Rublev to the bombing.

Thankfully, the phone was found by one of Sirenko’s men. They hadn’t tossed the phone or erased it when they found it. They also didn’t report it to Sirenko. Sirenko had no clue that the phone was still in play until the New York District Attorney said they were going to use it against him. It turns out the video was of Rublev saying that Russia was backing a bomb in America. It was great evidence. It would do all the heavy lifting. DA McCoy was even cutting corners with other things. He wanted to try both Sirenko and Rublev together. Those two terrorists didn’t like it. They especially hated the video.

They tried to get it thrown out of court. Sirenko’s guy didn’t want it to lead back to him and so he was a no go. The only person who could authenticate the video was Nicole. Nicole was the other teenager being trafficked that day. She was in the video and she could testify the video was accurate. Something that both Sirenko and Rublev realized. They sent people after Nicole. They tried to kill her and Detectives Rollins and Dawson protected her. They kept her safe until backup arrived. But Rollins was shot. She was rushed to the hospital and the only thing the hospital would say was that she was in stable condition.

The terrorists only found Nicole because she kept a cell phone. She was supposed to have turned over all of her devices and she didn’t do that. She kept one. She went on social media with it and someone sent her a dm. Its how they tracked her down. Nicole felt so guilty about it that she turned over her cell phone to Captain Olivia Benson. She apologized over and over. She never wanted anyone to get hurt. She was just fourteen. She wanted to be a kid and so Benson decided to protect her. Benson put Nicole before the case. She tracked down a distant relative of Nicole’s in Canada. She put Nicole on a plane without clearing it through anybody else. And now Nicole is gone.

Nicole will not be testifying in the trial against Sirenko and Rublev. The District Attorney couldn’t make a case without her and so he did something he hated. He chose to make a deal with Sirenko. McCoy said that Rublev was the bigger fish. He was the danger. They could use Sirenko to get the dirt on Rublev and while no one liked that idea – his ADAs still carried out his wishes. They made the deal. Sirenko will now get twenty years in prison rather than the several life terms he deserves. The man could even look forward to one day being released. And so Sirenko later testified against Rublev.

Rublev then got scared. He offered to give the government full intelligence on Putin. He just wanted immunity in exchange for him turning rat and ADA Price refused to give him that. He was mad about the Sirenko deal. He was even angrier about cutting a deal with Rublev. He was still going through with it when someone shot Rublev while he was being transported. And now Rublev is dead, but Sirenko still got his deal.

And the city of New York was angry about that! The only thing Cosgrove could tell is his daughter is that world wasn’t perfect, but it was still beautiful.