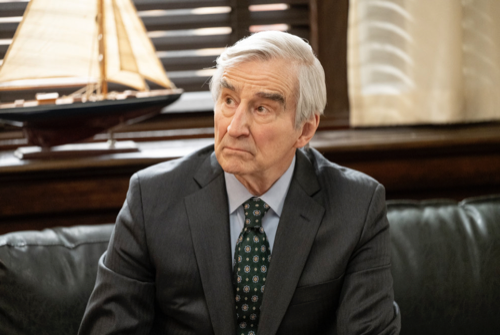 Tonight on NBC Law & Order returns with an all-new Thursday, March 17, 2022 episode and we have your Law & Order recap below. On tonight’s Law & Order season 21 episode 4 “Fault Lines,” as per the NBC synopsis, “After a family court judge is murdered, Bernard and Cosgrove dig into the many grievances against him. When the DA’s office is faced with unforeseen challenges, Maroun takes matters into her own hands to save the case.”

Tonight’s Law & Order season 21 episode 4 looks like it is going to be great and you won’t want to miss it.

In tonight’s Law & Order episode, a woman and her daughter find a man face down in a parking garage. The team arrives. It looks like the man was hit by a fire extinguisher and no money was taken. They discover he was a judge, Judge Keating. They talk to Keating’s wife. She reports he was troubled recently. They got into a fight that morning.

Kevin and Frank speak with a woman seen in a video in which a man confronted Keating on court steps. The woman tells them she is a friend and knows Keating. She was there when the man was angry over his custody loss, decided upon by Keating. They find the man, Wallace, and question him.

He denies any wrongdoing. He only argued with Keating. They ping his cell and find he was near Keating’s home. They take him in. He shares he was with his son and has an alibi.

After some more digging, Kevin and Frank discover Keating loved to gamble and was in deep with a bookie he was recently texting. They bring the bookie in. He did threaten Keating but didn’t hurt him. Keating paid him. They made the exchange in the parking garage.

Just then, they learn of DNA on the fire extinguisher left by a woman. They talk to the bookie again who confirmed he did see a woman in the parking garage. He gives them a description of the vehicle she was in. They track down the woman’s boyfriend. Her name is Lucy and she is a tennis professional.

Kevin and Frank go to see Lucy who is on the courts with her dad. She try to question her. She refuses to speak and refuses to supply DNA. After she walks off, Frank grabs a sweaty towel she was using.

The case goes to court with Nolan unsure of how to prosecute without motive. Jack tells him to state the facts to the jury. Just be honest. He does that. The jury look confused. The bookie takes the stand next. Later, Lucy’s boys takes the stand. They force him to answer without immunity.

The defense changes their plea, citing Lucy has psych problems. The next day, her psychiatrist takes the stand and shares Lucy has bipolar. Nolan’s plan is thrown for a loop when he learns Lucy’s father is her guardian. After, Nolan and Sam dig into Lucy’s guardianship and learn a prior psychiatrist believes Lucy’s dad became her guardian to control her.

They head to tell Jack. They believe Lucy wanted to miss games and marry her boyfriend. Her dad wouldn’t let her so she killed the judge who arranged the conservatorship.

Nolan and Sam argue over whether it is murder vs. manslaughter. They speak with the opposing council who wants to try their hand at a possible murder charge. Kevin meets with Lucy and explains what will happen to her and her future. He talks about her controlling father.

The next day, Lucy pleads guilty. She confesses to the court she killed Keating because she wanted to marry her boyfriend. He didn’t listen so she struck him in the head.