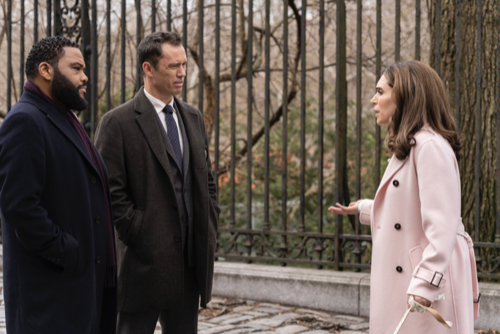 Tonight on NBC Law & Order returns with an all-new Thursday, May 5, 2022 episode and we have your Law & Order recap below. In tonight’s Law & Order season 21 episode 8 “Severance,” as per the NBC synopsis, “When the CFO of a Fortune 500 company is found strangled in her home, Bernard and Cosgrove work to connect multiple dead ends to find her killer. The prosecution is faced with an uphill battle as McCoy and Price butt heads over a choice that could cost them the case.”

Tonight’s Law & Order season 21 episode 8 looks like it is going to be great and you won’t want to miss it.

Tonight’s Law & Order episode begins with Alexis Morphew who gets a text, then joins a meeting with five other people. She tells them it is 10pm, she will see them tomorrow and they should stop what they are doing, tomorrow there will be difficult questions to be had. Then, there is someone at her door, she opens it up and asks what the hell they are doing there.

The next day, Alexis is dead, Cosgrove and Bernard are on the scene. It looks like she struggled, there is blood under her fingernails. She is still wearing her jewelry. The alarm was turned off when she let the person in, means she knew them.

They meet with Collin Baker who says that they were in virtual meetings sixteen hours a day, she was distracted yesterday which us unlike her. He is a consultant, she is the CFO of Questarc, they were working on a project together.

Her phone records show a lot of texts. Her boss tells Cosgrove and Bernard that Alexis was having problems with a former employee, he promoted Alexis to CFO and her predecessor accused her of sabotage. The emails were not hard to find, Alexis put them under a folder call threats. The guy, Terry Valentoni, was sending Alexis messages saying he would destroy her. And, he has a temper, his ex-girlfriend filed a restraining order because he was getting physical with her.

A visit to Terry and he admits that he sent a couple of ill-advised emails, so what. Terry says he got fired because of Alexis. He was employee number six, ruined two marraiges building it up for from the ground and it is not fair. At the time that Alexis was killed, he was out of the country. He suggest that they speak to Keila, her assistant. Keila thinks Alexis may have been seeing someone, and he was possibly married too. A week ago she heard her on a phone call and she said they couldn’t be seen together, she used a secret phone.

Next stop is to see Robert Fletcher, he says he doesn’t know who Alexis is. Bernard tells him that they found a burner phone in Alexis’ apartment and the calls where to his phone. He is shocked, he didn’t know she was dead. He says he is gay, they were working together on an article, the toxic environment at Questarc, in particle Ethan Merrit. She was a whistle blower, she said that Ethan intimidates employees and even through a charge through a glass wall one day. A hit piece like that can ruin him.

Cosgrove and Bernard bring in Ethan and say they have him on video sneaking out of his apartment the night of the murder. He says he didn’t kill her, he wouldn’t blow up his life just because Alexis was bitter and disgruntled. He lied because he has to worry about appearances. He is dating an employee, he was with her that night and he didn’t want anyone to know, her name is Shannon Dunshire. He agrees to a DNA swab and it doesn’t match, and his girlfriend confirms his alibi. They went back over the footage from the video canvass, they found a guy in convenience store six blocks from Alexis apartment, he is Guss Amelski, the founder of a solar company that Questarc was about to acquire. When they were collecting Terry’s DNA, he mentioned that the deal was cut off by Alexis, Guss would have gotten a 300 million payday.

Next stop is to Guss, he says yes he knew the deal was cut off, he went to her house, he knocked and she never answered, it was about 10:15pm. He says he didn’t kill her and they can ask Collin Baker, the consultant that Questarc hired, he bumped into him a block away from her house. He asked about the deal and he blew him off, kept walking.

Cosgrove reminds Collin that he said that he never met Alexis, yet he was a block away from her house. He says he didn’t do anything, he was out for a walk. Bernard asks him how he got the scratches on his arms, Collin won’t say so they bring him into the precinct.

In court, Collin is charged with murder in the first degree. They found his DNA under Alexis’ fingernails. He suffers from severe headaches and wants to be sent home under his wife’s care who is a doctor. The judge says no, he is remanded. Collin filed a motion to supress the DNA sample because he claims he had a migraine at the time, that he failed to mention. His lawyer says he was suffering severe mental overload and was on medication for his migrain, the DNA is out.

Price is in court, he says Collin made a mistake, he overvalued a company that Questarc was going to buy and that is why she squashed the deal with Guss’ company. Price says he wrapped his hands around Alexis’ neck and choked the life out of her. They put Guss on the witness stand, he mentions that he saw Collin in the neighborhood. Price gets up and asks Guss about his DNA, he says it was not a match. Collin gets angry and starts freaking out in court and yells at Guss, “why are you doing this?” Collin needs to be taken out of the court room.

Now Collin’s lawyer says that she had someone examine her client, he has a prexisting condition and he is pleading mental desease or defect. She had him examined, he has Havana syndrome. Collin was stationed at the embassy in Havana a long time ago. He first sought medical help for his condition back in 2017, so it makes his claim credible. Price doesn’t believe it, but Maroun does.

The defense supeonas the director of defence of the CIA and he goes to see McCoy. The defence wants to shift blame to the agency.

McCoy goes to speak to Price who says he has no interest in considering a plea for Collin Baker just to cover up the federal governments blunders. Price says Collin is lying through this teeth, there is no data that says Havana Syndrome can cause someone to kill another person. Price tells McCoy that he can tell his friend at the CIA that he is very comfortable with his cards.

Back in court, a doctor testifies that Collin could have had no control over being violent because of his condition. Price confirms that Havana Syndrome cannot be detected with any test, it is from the patients account of how they feel. They can only diagnose post-partum. His wife is next on the witness stand, she says her husband was always really kind and gentle, but in the last year he started having violent outburst, like a different person and she considered even leaving him at one point, she feels terrible, she didn’t realize it was Havana Syndrome.

Price is next to question her, he asks her what she pratices, she is a pediatrician. Since they have been living in NY, and she is a medical doctor, her husband never sought medical attention. Collin is on the witness stand next, he says he went to Alexis’ house to try to salvage the deal, he guesses they got into an argument, he doesn’t remember, he blacked out. He remembers talking to her, then he was sitting on the stairs with scratches on his arms and Alexis dead. He panicked and ran home, he didn’t intend to hurt her, she was his friend.

Price is next, he asks Collin when he realized his friend was dead did he call the police, he says no. He says he didn’t know how bad his condition was, the government lied to him. Collin says it just happened and he honestly doesn’t know why, he is sorry he can’t take it about and he doesn’t know what to do, he will never forgive himself and he is sorry.

A verdict has been reached, the jury finds Collin not guilty by reason of mental disease.

Price is in his office, McCoy walks by and Price says he still thinks he is guilty.