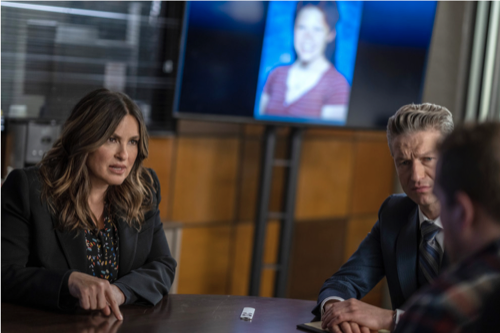 Tonight on NBC Law & Order SVU returns with an all-new Thursday, March 3, 2022 episode and we have your Law & Order SVU recap below. On tonight’s Law & Order SVU season 23 episode 14 “Video Killed The Radio Star,” as per the NBC synopsis, “Benson investigations allegations against a popular radio personality. Rollins goes undercover when a shocking confession leads to another crime.”

Tonight’s Law & Order SVU season 23 episode 12 looks like it is going to be great and you won’t want to miss it.

Bob Flynn is hosting an auction/gala for Hudson River School, Olivia and Trevor are there, and Bob is quite the flirt. Trevor is speaking and Bob is grabbing the butt of Mitch Caplan’s wife. Later the woman is preparing girt bags in a room, Bob sneaks in, closes the door, and attacks her. She says no, but he won’t listen. When leaving, Olivia sees the woman and can sense that something is not right.

The next day at the station, Benson brings donuts for everyone. Mitch and his wife, Ellen, walk into the station, Mitch is upset, he knows about Bob groping his wife. Rollins and Benson speak with his wife, but she doesn’t want to press Charles, Ellen walks out. Rollins goes after her, tells her she needs to sign some paperwork but she just tries to get her in with Benson. Alone with Benson, Ellen says her husband is protective. If SVU goes after Bob, she is afraid that her husband will go after him and destroy himself after two hours because of his temper. She goes on to say that Bob cornered her, pushed her against the wall, and raped her. She says if she fights Bob will gloat on air about how she wanted it, and it’s not worth it.

The SVU team sits down and watches one of Bob Flynn’s podcasts. Benson says she cares about building a case, he three previous allegations of sexual assault when he was stationed in Iraq. He started his career as a lawyer and went on to a radio host. Benson says Bob is an egomaniac, she can go in as a married woman and wear a wire. Carisi is going to go undercover as her husband.

At Crosby Books, Bob has a book signing. Rollins goes up to him and asks him to sign a book, doesn’t take long for him to invite her upstairs. Fin is there as well, he is undercover as a security guard. Alone with Bob, he immediately comes on to her and tells her not to worry about her husband, he has killed a man that has tried to stop him. She whispers in his ear that she is a private investigator, Mitch hired her.

The next day, Rollins tells Benson about what happened. Benson wants her off the case, it’s too dangerous. Rollins wants to do it, Bob likes her and she can get him to confess about the murder. Benson says her radar is up, she doesn’t like this. Rollins promises to be careful.

NYPD Cold Case Squad, Fin is there to see if he can dig another up about a victim being shot “center mass” like Bob said he did. Meanwhile, Rollins is at Bob’s office, he says he enjoys a hunt. Benson and Carisi are listening in. Bob asks her to work for him and he will pay her double. He tells her to get Ellen on tape confessing that it is a lie. He tells her that if she is thinking of triple crossing him, don’t. Fin thinks he found Bob’s victim, Kenneth Cross, shot twice in the chest. There is a photo of Cross’ widow, Lola, in the file. As Rollins tries to leave, Bob makes a pass at her and she pulls a gun on him – he smiles and says it is hot.

At the station, Rollins says that Kenneth and Bob were in the same grad class and worked briefly together. Bob was having an affair with Lola.

Finn and Velasco investigate Lola, she says she doesn’t understand why the case is coming up over a decade now – her husband was murdered in a robbery. She knows Bob, she says they were all partners in the law firm, their relationship was cordial. She adds something to know, Bob will say anything for attention.

Benson wants a tap on Lola’s phone, Rollins gets a text, Bob wants to see her. Benson tells Carisi that their best play at this point is to give Rollins another shot. Rollins enters Bob’s apartment, he gives her ten thousand dollars and tells her that she works for him now. He asks her if she told NYPD about the whole murder thing because somehow his name came up. He tells her that his partner was shot ten years ago, and today, his widow calls him because the NYPD was there to interview her.

Bob was having an affair with Lola, then Ken and Lola blackmailed Bob, they shook him down – it was all a scam that they had going on. Bob is now backtracking on the murder. Rollins goes back to Bob’s place, Velasco and Fin are outside keeping an eye just in case. Bob admits that he told Lola that nobody shakes down Bob Flynn, but he did not kill her husband. He says that she is trying to turn on him to save herself. He asks her how connected is she, he wants this woman out of his life for good.

At the station, Velasco says to hire a hitman. Carisi says there is a thin line between entrapment and intent. Mercer Street, in Soho, Rollins arranges a meeting for Bob to meet the hitman. Bob says Lola is like family to him, he wants her taken care of. He hands Velasco cash, he says half now and half once the job is done.

Benson and then Carisi show the video to Lola, she is shocked that Bob hired a hitman to kill her. Benson tells her that they know that she and her husband were blackmailing Bob and their fake charity. She says fine, Bob did it. He came to her apartment afterward, and said he took care of it and threatened to kill her if she said anything, two shots, “center mass.” Benson tells her that all they need is Bob, on record, saying he got what he paid for.

Velasco shows Bob a photo of Lola dead, they meet near the water and Velasco asks for his money. Bob pulls a gun, tells Velasco asks to give him his phone. Then he tells Velasco and Rollins that they are going for a ride. Bob laughs and says he is just messing with them. He gives Velasco his money. Then, a half dozen cards show up and arrest all three of them, Rollins tells Bob to be quiet.

Bob is pleading not guilty, and in the meantime, he goes on air to plead his case. He says Mitch’s wife had a thing for him, goes after him and then he forces his wife to say that he came on to her. Then he talks about Rollins going undercover and says everything negative he could find in her life. Just then, Mitch walks in with a gun and says Ellen told him what he did to his wife. Bob laughs at Mitch with the gun. Fin calls it in. Mitch shoots him once from him and again from his wife.