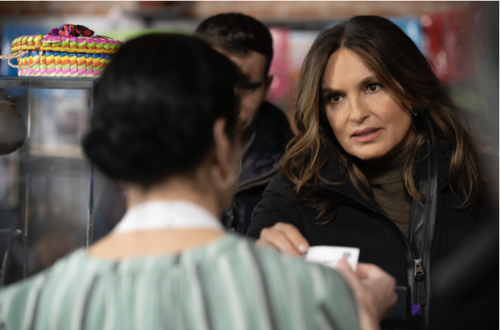 Tonight on NBC Law & Order SVU returns with an all-new Thursday, April 7, 2022 episode and we have your Law & Order SVU recap below. In tonight’s Law & Order SVU season 23 episode 17 “Once Upon A Time In El Barrio,” as per the NBC synopsis, “Velasco asks Benson for help finding three girls who were trafficked from his hometown to New York City.”

Tonight’s Law & Order SVU season 23 episode 17 looks like it is going to be great and you won’t want to miss it.

Tonight’s Law & Order SVU episode begins in Juarez, Mexico at UsMex International Models. Three girls are waiting in a room and one is called in. Marielle is the first to be interviewed, the fee is five thousand dollars, and she only has five hundred. The interviewer says there maybe something she can do.

In Upper Manhattan, girls are being ushered out of a van. A man tells them they need their ID’s, jewellery and phones. Another man tells them it has been a long trip and gives them all a pill. One girl is defiant, she says she is not giving up her things, she elbows the man and tries to run away. He catches her and throws her to the ground, throws gasoline on her and burns her to death in front of the other girls screaming and crying. The man asks them if they have anything to say.

At the station, Benson tells Fin that Carisi is taking Rollins and her girls to Orlando for a couple of days. Finn asks about Stabler, he heard they booted him out of OC. She closes the door, he says Stabler is not calling him back. She tells him not to worry. Velasco rushes in the door, he was speaking to his priest, he needs their help. The priest shows them a photo of the three girls, he tells them that they were smuggled into NY and he got a voicemail from one of them screaming, they are in trouble.

All three girls are off the grid, their cell phones are dead. Finn gets a call, and a badly burned body of a female was found, matching the description of one of the girls. Velasco is able to ID her from a cross necklace that she had on, it was the same in the photo. Velasco calls his priest, he tells him that one girl, Marielle, is gone, Lydia and Sophia are still missing. Velasco had a tough day, Benson orders him to go home. Velasco hits the street, he speaks to some prostitutes and asks where to find some Mexican girls. He pays a girl $50 to speak, he wants to find the girls. Little does he know, the girl he pays is an undercover cop and finds himself arrested.

Finn and Benson go to get Velasco out, Benson tells him that if they weren’t short staff she would take him off the street. The undercover cop, Chavez, takes them to a café where women who help the girls, she says they come in with a man, a bald head, cold eyes – the girls are quiet around him. Velasco shows a photo, she doesn’t recognize any of them.

Sky High Motel, the team heads over there to ask questions and see if anyone recognizes the girls. A maid, Lucia, recognizes them but she won’t talk.

Benson tells Finn and Velasco to find out info about Lucie. Just then, Velasco gets a call, and Lucie wants to talk. Benson, Finn, and Velasco head to the café to speak to her, they look outside and Chavez is with Lucie crossing the street when an SUV hits them. Lucie runs and Chavez is hit.

Chavez is rushed to Mercy hospital, and she dies. Benson tells Finn and Velasco to find Lucie, she may have been injured.

Velasco gets some information from the women at the café, he heads to a funeral home and says he hurt his arm, she takes him to the basement in a makeshift clinic where he finds Lucie who begs him to leave her alone. Lucie is brought into the station, she says if they send her back, they will kill her. Benson tells her to trust them. She gives up some names. Benson tells her that they want to find her a safe place to stay, and they also want to help the other girls. She says they will never find the other girls, they are going to send them to another girl. Benson asks where, and she says maybe the policeman knows, he is the captain and they had to have sex with him, do whatever they wanted. She told Chavez about it.

Benson calls in captain Kubiak, she tells him that Baptiste is on his way in and they are putting together a task force. Kubiak asks about Lucie, and Benson says they can’t find her. Velasco walks in, he finds the woman who is running the bogus modeling agency, her brother Jorge, who runs the girls from NY, and pimps them out. Kubiak looks at the photo, he says he doesn’t recognize him. Velasco has something else, a list of phone numbers Jorge called in the last 24 hours. Finn tells him to run the numbers, and Kubiak’s cell phone rings. It is his number and Jorge called it a lot. Benson asks Kubiak if he has anything to say, he says screw you.

The judge signed off warrants so they can get information about Kubiak. Lucie is in protective custody, but they are going to bring her in for the lineup. Lucie calls it, she recognizes Kubiak and starts to cry, she says he is the policeman who made them have sex with him.

Kubiak says everything with Lucie was consensual. Benson wants to know where the other girls are, or what she is going through his whole life. Benson asks him how complacent was he in the death of his own detective. He tells Benson to give him more respect or God knows what might happen to these girls. Finn interrupts, they have new information, Lucie is 15 years old. Finn says they are getting her birth certificate right now. Benson tells Kubiak to think about what life as a pedophile cop is going to be like in prison. Kubiak calls Jorge, he offers to drive the girls to Buffalo. He says ok, but he goes with him and tells him to pick up a new burner phone.

Velasco goes undercover as a buyer, Kubiak and Velasco meet with Jorge. They load the girls in the van, Jorge pulls a gun on Velasco, but the rest of the team comes up and pulls their guns on Jorge, Velasco tells him it is over. Jorge drops his gun Benson opens the van, lets all the girls out, and tells them that they are safe.

Velasco calls his priest, he tells him that they have found Lydia and Sophia, they are safe along with some other girls.