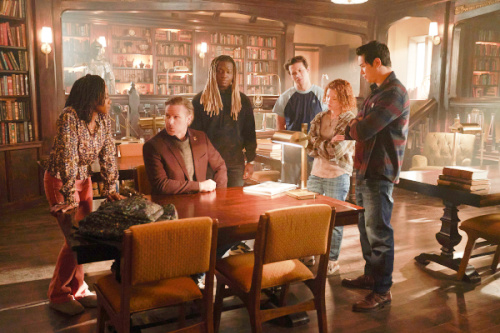 Tonight on the CW their new supernatural series Legacies air with an all-new Thursday, April 28, 2022 episode and we have your Legacies recap below. In tonight’s Legacies season, 4 episode 12 called, “I Wouldn’t Be Standing Here If It Weren’t For You,” as per the CW synopsis, “Hope (Danielle Rose Russell) continues her fight, and Lizzie (Jenny Boyd) devises a plan to potentially help. Cleo (Omono Okojie) is fearful of her visions and what it means for those she loves.

In tonight’s Legacies episode, Cleo shows Kaleb the sketches of her recent visions. She doesn’t want to show him, as they are scary. One page shows the school destroyed while another shows a broken dish. Just then someone drops dishes at the outside cafe there are eating at. It seems some of her visions are coming true.

Hope is still behind bars. MG comes to visit her. Ric brings Lizzie breakfast. She hides under her blankets. Ric needs her to open up to someone. Meanwhile, Seylah pays a visit to Landon and the necromancer. She is also Landon’s mother.

Ric sits with Cleo, Kaleb, and the others. They need a plan to protect the school. Ben’s sister points out that Cleo is an oracle and it doesn’t matter what they do. Destruction is in the cards. Behind bars, Harmony continues to fight with her other side. Lizzie comes to see her. They need to talk. They end up fighting. Hope’s humanity was off but Lizzie was herself the whole time.

Landon’s mother admits she has known he was in Malivore the whole time. Meanwhile, Cleo draws a vision of Ben killing someone. She shows Ben.

Lizzie offers her help to Hope who is still trying to work out her issues. MG glamours the bus driver who takes away all the students to safety. He and Kaleb feel like something is wrong, it’s so quiet and eery. Kaleb then spots Ben with a lighter and gas. Kaleb questions him. Ben admits his dad is coming to the school so he needed to have Cleo see what he was up to so he could warn them. Ben then pulls a parking meter out of the ground and knocks Kaleb out with it.

Lizzie brings Hope a jewelry box. They will use it as part of a spell to get rid of Hope’s bad side. Meanwhile, Jed arrives and comes face to face with Jed.

Landon shows his mom the shop he has been working at. He offers a container of coins she can use to cross over. She tells him she has tried repeatedly and cannot cross.

As Lizzie and Hope work their spell, the earth shakes. Ben’s father has officially arrived. In a booming voice, he demands his daughter who came to the school with Lizzie. Just in time, Lizzie and Hope track down Ric. Hope is back to herself!

Cleo find’s Ben’s sister in the woods. She is running from her dad. Cleo tells her to come back. They can protect her. Hope knocks everyone out with a sleep spell. She tells Lizzie she needs to protect them. She plans to face the God with Lizzie’s help.

Landon’s mother has accepted she isn’t leaving Malivore. She also knows she wasn’t a good mother. Landon assures her that she dint ruin his life, he knows love and happiness and more. Just then, his mother gets a coin. She smiles.

Hope meets Ben’s dad, a God, on school grounds. She threatens him before distracting him. Lizzie tries to work a spell but he sends her flying as well as Hope. He then picks up Lizzie and throws her. She lands on the fence that impales her. Meanwhile, Jed chases after Ben. Ben admits he woke his dad so he would break his curse and end the monsters and more. Jed looks understanding. When Ben leans in, Jed snaps his neck.

Hope continues to fight Ben’s dad but she won’t die. He is annoyed. Just then, his daughter shows up. She will go home with him. They rocket into the sky.

Lizzie wakes, healthy but tired with Ric at her bedside. Ben comes too as well with Jed telling him his dad is gone but will surely be back for something he wants. Jed is done though when it comes to Ben and his trust. He locks him in the cell once used by Hope.

Landon says goodbye to his mom as he crosses. MG goes to thank Ethan who falls out of the shower. He is shaking and bleeding from the mouth.

Cleo watches over Hope as she rests. She hasn’t woken yet. She and Kaleb talk about her visions.

Landon waves one last goodbye to his mother. He looks sad until he turns to find Hope. They hug without speaking.