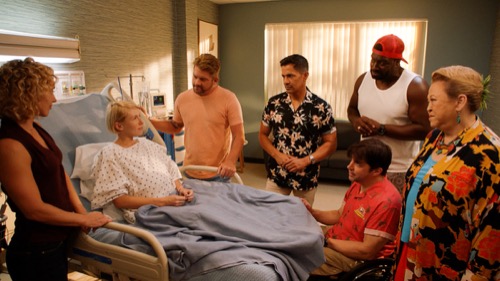 Tonight on CBS their reboot of the classic series Magnum P.I. airs with an all-new Friday, May 6, 2022, episode and we have your Magnum P.I. recap below. In tonight’s Magnum P.I. season 4 episode 20 finale “Close To Home”,” as per the CBS synopsis, “Magnum and Higgins take on a dangerous mission inside a high-security correctional center when a ruthless criminal abducts Katsumoto’s ex-wife, Beth. Also, T.C. rushes to help Rick when Suzy has unexpected pregnancy complications.”

In tonight’s Magnum P.I. episode, HPD Detective Gordon Katsumoto was abducted, tied to a chair, and forced to watch a video. This video was of his ex-wife who was also abducted and tied to a chair. The people behind this were threatening to kill Beth if Gordo didn’t help them with their little problem. But Gordo was a cop. He was a good cop. He knew that whatever these people were going to ask was going to somehow be involved in breaking some law and so he couldn’t exactly play ball with them. He doesn’t know them. He doesn’t know if he can trusts them. He was genuinely worried about Beth and he turned to the people he knew he could count on. He called Magnum and Higgins. He asked them to meet with him on a remote beach.

Higgins had been about to take the plunge. She was going to tell Magnum she has feelings for him when she saw Lia at his place and assumed the worst. Magnum had later clarified that nothing happened. He could have sworn she looked disappointed when she saw Lia and so Magnum felt he needed to justify his actions. But Higgins had already chickened out on telling him her feelings. She hadn’t wanted to be honest with Magnum about why she went over to his place that day and then this thing with Gordo happened. They both went to the beach. They waited for Gordo to show. Then, when he did, he told them what happened.

Gordo was honest from the start. He said that he and Beth had been kidnapped. He also said that the kidnappers were threatening to kill her if he doesn’t kill someone for them first. Gordo was told to kill his former partner Shane Whelan. The man was in prison. He was actually in protective detail and so the people that wanted him dead couldn’t reach him by usual means. Gordo on other hand does have access to Whelan as a cop. He could bring him out for questioning at any time. The kidnappers were hoping that Gordo could use that opportunity to kill Whelan and killing a person is just Gordo couldn’t do.

Gordo is a good man. He doesn’t want to kill people. He may have killed people during the line of duty, but that was it and so Gordo was hoping that Magnum and Higgins could help him find Beth before the deadline was up. The two private investigators looked into it. They traced Beth’s last movements. She had gone jogging the night before when two men in masks abducted her and threw her into a stolen car. Magnum and Higgins tracked that car back to an area. They then had Gordo describe what he saw in the video. It was a match for a bakery. The two PIs and Gordo went there to go rescue Beth.

Only she wasn’t there. She had been moved to a second location and the kidnappers had figured out they were being tracked because they called Gordo. They video-chatted him as they shot Beth. They hadn’t killed her. They simply shot her in the arm to show that they were serious. Gordo flipped out. He threatened to kill the kidnappers and they told him to calm down. To focus on the mission. Gordo was so scared for Beth that he actually considered killing Whelan and so his friends had to talk him down. They helped him to focus on what they could do. They could break Whelan out of prison and use him as a bait to lure out Beth’s abductors.

There were just a few hitches with this plan. One, it was incredibly illegal. Two, it required asking Rick for a favor while he was busy at the hospital because Susie had gone into labor. And three, it required Magnum to move throughout the prison with no issue. The last part was a serious problem because there’s plenty of people he helped put behind bars and so he did end up running into someone while he was pretending to be a regular guard. He had to run. He had to fight. He also had to hack the computer system to hide the fact that they were abducting a knocked out Whelan from prison custody.

Luckily, Higgins was good at computers. She shut down the inside cameras. They broke out Whelan and afterwards they contacted the kidnappers. They knew who they were now after Whelan talked. The reason Ray Nascano wanted Whelan dead is because Whelan was recently in contact with federal law enforcement and he was willing to talk. Back in the day, Whelan and Gordo were investigating Ray. Whelan got dirt on him. He didn’t tell his partner because he chose to blackmail Ray and it worked until Ray realized he needed to get rid of them. He couldn’t kill the cops. It would draw too much heat. His backup plan was killing Gordo’s sister, Kim.

Gordo took leave once his sister died. Whelan found out about what happened after the fact and that Ray had covered it up by bribing the Medical Examiner. And so he told Gordo right before the meet with Ray. They used Whelan to lure out Ray and his people. But Gordo had Mangum and Higgins there. They helped him to defeat Ray. They killed his men and Gordo wanted to murder Ray as well when Magnum stopped him. He told his friend that it wasn’t worth it. Gordo chose not to kill Ray. Ray was going to prison. Gordo however had been suspended without pay and odds are he’ll be arrested once the suspension is over. And so that’s it for his badge.

But Susie suffered some blood loss after she delivered a healthy baby girl. She almost died and she had to be rushed into surgery, but she pulled through and she later got to meet her daughter. A daughter she named Joy.

Everyone was celebrating when Higgins walked off. She went to the rooftop where she met up with Magnum and they both admitted to having feelings for each other and at first they said it would be better to remain as friends. But then he kissed her. She kissed him back. And who knows where things will go from there.