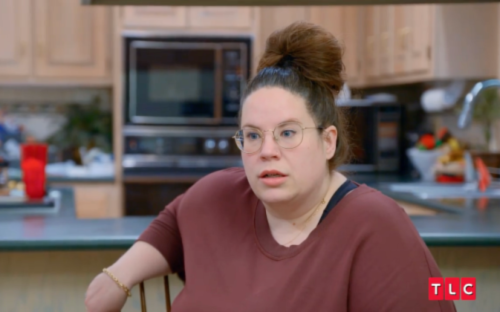 Tonight on TLC their popular reality show My Big Fat Fabulous Life chronicling the life of Whitney Way Thore airs with an all-new Tuesday, August 30, 2022 episode and we have your My Big Fat Fabulous Life recap below. In tonight’s My Big Fat Fabulous Life season 10 episode 4 called, “A New Home For Babs”, as per the TLC synopsis, “When Babs is released from the hospital, Whitney, Glenn and Hunter must scramble to find a place for her to live. With the wedding quickly approaching, tensions between Jessica and her fiance heat up.”

In tonight’s My Big Fat Fabulous Life episode, Whitney and her family have to consider where Babs is going after the rehab. She couldn’t go home. Her house wasn’t currently equipped for her needs. She needed around-the-clock care and so Babs was going to stay in a senior living facility for a short part of her rehab. Just until her house was made ready for her. Her family had one week to get a place ready and Whitney naturally created a binder for it. She gathered as much information as she could and she shared it with her family. Her brother couldn’t stop himself from making jokes about it. Then again he was the same guy that was moving to Atlanta during this critical time. And so Whitney made him focus on their mother.

They ultimately chose a senior living home. Babs was going to stay until the house was ready. Everything was worked out until it wasn’t. The living facility was later called Whitney. They told her that they couldn’t take her mom and that left the family scrambling to find alternate care. Whitney was also dealing with a lot. Lennie was back in her life. They dated for a while. They broke up and cut contact afterward, but he’s back in her life now, and this time as a friend instead of a boyfriend. Lennie was also sober now. He reached sobriety during his time away and it seems to have made him more chill.

Whitney didn’t have to worry about a jealous boyfriend because they were long-distance. They began as long distances and they’re lasting the as long distances. The Frenchman was pretty open-minded about everything. But he probably won’t like it that Whitney was attending a wedding with Lennie as her plus one. One of Whitney’s friends was getting married and she convinced Jess to incorporate the dogs into the wedding. The dog was going to act as ring bearer. Whitney then said that Lennie could bring the dog to the venue. She also added how they should feed Lennie while he was there seeing as he was helping them. And so she suggested he be her plus one.

Whitney said it on the spur of the moment. She didn’t think it through. It wasn’t like her getting a new roommate. Whitney possibly getting a new roommate. Her last roommate didn’t work out. It had been Buddy and he was supposed to move in with her and then never did. She ended up having to ask him to clear out his stuff. Now, she talking to someone else about moving in. Tal had needed a temporary space. He didn’t feel like renting or buying. He has to leave his other place and he asked Whitney if it would be okay if he lived with her in the attic space while he looked for a permanent home. And Whitney had told him that she needed to get back to him because she wanted to think about it first.

But sometimes Whitney overthinks things. Whitney found her mother in a senior living facility. She moved out several of her mother’s things at her parent’s house because she wanted to bring the stuff to the facility and have her mother be around familiar items. Only she took it a little too far. She moved out a lot of stuff and the facility doesn’t have the space for it. Whitney and her family went to the apartment at the facility where Babs was supposed to be staying. It was smaller than it looked in the photos. There wasn’t room for most of the stuff that Whitney brought and so her father turned out to be right.

Glenn hadn’t liked his daughter moving out so much. He thought it would be too crowded. He tried to warn Whitney about it and she got an attitude with him. She said she got this. She measured everything with an interactive planning tool and yet there wasn’t room for any of it. Her mother’s single bedroom space didn’t have room for a dining table much less four chairs and so it had been a waste for Whitney to get those items. There wasn’t even room for nightstands next to the bed because the bedroom was just too darn small. Whitney had to take back a lot of the items, but what she did move into the apartment had made it look like an extension of the house.

The place looked beautiful. Whitney did a great job. She made the apartment feel like a home and everyone thought so. Even her own father thought so. He and Hunter stopped by after the place was put together and they said that Babs was going to love it.