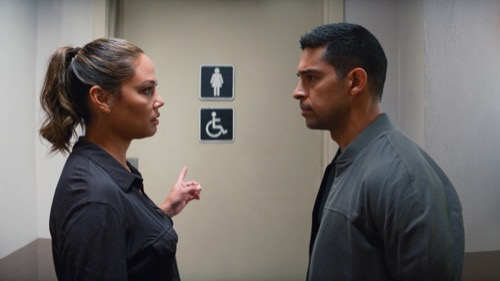 Tonight on CBS NCIS Hawaiʻi returns with an all-new Monday, September 19, 2022, season 2 episode 1 called, “Prisoners’ Dilemma,” and we have your weekly NCIS Hawaiʻi recap below. In tonight’s NCIS Hawaiʻi season 2 episode 1, “Prisoners’ Dilemma,” as per the CBS synopsis,“Special Agent Tennant’s team, along with NCIS agents Nick Torres and Jessica Knight, learns about plans for an attack on RIMPAC (The Rim of the Pacific Exercises) in Oahu, the world’s largest international maritime warfare exercise, on the conclusion to the special NCIS crossover event and the season two premiere.”

In tonight’s NCIS Hawaii episode, A wanted man flew his private jet to Hawaii. Hermann Maxwell was wanted because he was a known terrorist that worked under the nickname the Raven and he was set on creating chaos wherever he goes. He broke away from the local NCIS Agents back in Virginia. He came to Hawaii in spite of the price on his head and so the question had to be why? Why did Maxwell come to Hawaii? Hawaii was home to beautiful beaches. It also was the setting for the largest maritime exercise in history. The American Navy was going to do this exercise along with twenty-five other nations. And there was going to be a lot of press.

For a guy like Maxwell, this naval exercise could be the setting for his next terrorist attack. Maxwell, unfortunately, loves bioweapons and so everyone knew he would use one in his next attack. They just didn’t know when or where. Would it take place on the water? Would it take place amongst the crowds watching on the mainland? Maxwell could be planning any number of things. The team needed to take him down and they were getting help from their fellow NCIS friends. Special Agent Parker stayed behind to question a guard in frequent contact with Maxwell. And both Torres and Knight left with Tennant and Ernie to fly back to Hawaii.

Ernie should know lots about Maxwell. Back when he was in the NSA, he wrote the dossier on Maxwell that brought the man down and got him arrested. Ernie, therefore, thought he knew everything that he needed to know to unravel Maxwell’s secret servers. But Maxwell was one step ahead of him. Maxwell laid out a trap for the local NCIS agents. They thought they were arresting Maxwell’s cult and they instead raised their guns on a group of senior citizens. It turns out the terrorists hid the guns in the old folks’ fanny packs. And so Maxwell’s crew got away before the team even knew what they were looking for.

Then to make matters worse, they did find Maxwell. Maxwell wasn’t on the private plane that flew into Hawaii. Everyone onboard the flight, besides the pilot, had been dead on arrival. They had been a part of a message for NCIS. They also held a cell phone that had a video of Maxwell that showed he was already on the island. The team went looking for him in the location from the video. They were surprised they found him so quickly and yet Maxwell still had a few surprises for them. He had his hand on a dead man switch. It was a bomb detonator. The bomb wasn’t with him nor was it located in the hotel he was in. And so the bomb was offsite.

Maxwell convinced Knight to clear the building as well as keep everyone out. He wanted to be alone with Torres and Tennant. Maxwell chose them because he knew neither were negotiators. Knight was. Torres was the muscle. Tennant was the boss. Maxwell just wanted to talk to someone without them using the chance to get into his head and that’s what he did with the two agents. Maxwell was talking while Ernie found something. Ernie realized that Maxwell kept with him some first editions in his prison cell. One book even had an inscription from someone with the initials “W.S.”. And Ernie found that person.

The inscription was from Woodrow Staggs. Staggs wrote a paper about crowd control and using fear to manipulate. It turns out Maxwell plagiarized that paper. He turned it into a manifesto. He controls his followers using that paper and so the team brought in Staggs. They questioned him. They even asked him about the inscription. Staggs didn’t remember any of it. He didn’t even remember Maxwell until they de-aged his photo. Staggs said Maxwell’s real name is Jason Herns. He was kicked out of the naval program for being psychologically unfit. According to Staggs, Maxwell was just too crazy to function.

Ernie got word to Torres and Tennant. He hacked the television behind Maxwell to give them information and he got caught by Maxwell. Maxwell then demanded that Staggs be brought to him. They thought he just wanted to gloat to his old professor. They didn’t realize until after Staggs went into that restaurant that Maxwell’s grand scheme had been about getting to Staggs. Staggs was on the land for a family thing. That’s what he told the team. The team looked into it and they realized that Staggs’s son was in fact taking part in the naval exercise. The hidden bomb probably involved the son. Maxwell wanted to hurt Staggs. There was no better way to do it than by killing his son.

Maxwell only got Staggs to come because he wanted to be standing by Staggs’s side when he killed the man’s son. But the team had resident bomb expert Bam Bam working on diffusing the bomb. Once they realized that Maxwell was after Stagg’s son, they went to the son’s location. They protected him and stopped the bomb. Maxwell was so shocked when he pulled his finger off the switch only to see nothing happen. He tried shooting Staggs and the team stopped him. And they arrested him again.

It turns out Maxwell wanted revenge because Staggs was the first person to believe in him and then he felt abandoned once Staggs had him kicked out of the naval program.

With Maxwell behind bars, Torres and Knight later grabbed a drink with Tennant’s team and all was well again in the NCIS world.