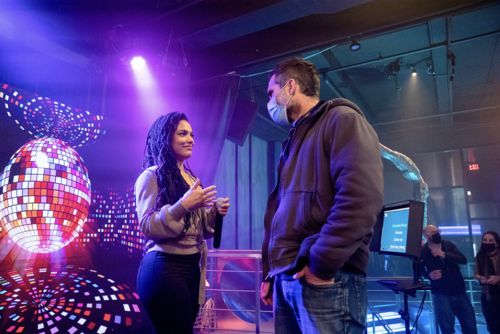 In tonight’s New Amsterdam episode, Max is performing karaoke with a lot of the staff all there for the party. Dr. Wicker signs the song. Helen arrives. Max wants to go home with her right away. After the next ends, Dr. Wicker is feeling lonely and invites a man to her apartment she hits upon a social media app.

The next morning at work, Floyd and Iggy feel terrible. Max is thrilled. Tonight is the board meeting so they can bump Veronica out. Lauren arrives. The meeting has been dumped out. Max doesn’t want to wait that long. Lauren and Max head to the clinic he is now running inside New Amsterdam. Immediately they help a man with an abdomen wound who gives them a fake name. Max runs for a unit of blood. Dr. Wicker’s associate shares that he cannot get in touch with her. “Elizabeth is never late,” he tells Max. He’s worried and texts her again.

The scene returns to the night of the club. Several of the gang sing karaoke. Lauren begs Casey to talk to her again. He agrees if she wears a taco hat. Casey leaves with a friend Ronnie who becomes angry when Casey asks him about the job he hooked him up with. Casey realizes he is high. They then get into a car accident.

Iggy asks Max to transfer the man with the abdomen wound to him. Just then, they become aware that he is climbing the side of the building. Lauren keeps trying to call Casey.

Back to the night in question where Elizabeth meets a stranger and Casey gets into a car accident, Floyd meets a woman at the club. She tells him he has a bad aurora. She then gets a bad text and downs a shot.

They all leave the club once again. The woman Floyd met gets on a bike and hits Floyd on her way down the street. She rushes to a bench. She then stands on it as if she is going to jump while she cries.

Max begs the man on the side of the building to come back in. He refuses to be locked up again. Max offers to help him.

After some back and forth, the man gives his hand to Max. Max gets him inside. Floyd stops by to see the woman he met at the club. She works at the hospital but didn’t show up today. He runs off.

Back at the club, Iggy throws back a drink while the co-worker who has a thing for him tells him he is on his vision board. He tells Iggy he is a successful good looking man. They drink to friendship. Helen takes the stage to sing All Night. Iggy orders another bottle of Champagne. Gladis comes over and tells him he may have had enough to drink. Iggy says he is fine.

Gladis is concerned that Iggy might be acting too social with his co-worker Trevor. Gladis takes the bottle and leaves. The night ends once again. Trevor and Iggy say goodnight to Elizabeth. The lady on the bike goes by. The two walk and talk, laughing. Iggy vents about not getting out anymore and his response with the kids. Trevor looks like he may kiss Iggy.

Floyd works on the man who climbed the side of the building. His co-worker shares he is moving to Colorado. Floyd looks sad. The man is dating Floyd’s ex. Iggy admits to Gladis something happened after he left the Abr with Trevor. They then learn Trevor didn’t come in today.

Back at the bar that night, Max and Elizabeth debate over songs to sing. They talk about Max missing Helen even though he denies it. He shares that he plans to propose tonight. The night later comes to an end. Max and Helen walk home. Helen notices Max is being quiet. He shares that Luna is off at the grandparents for the weekend. They get home. She heads to bed. He plans to meet her there. He grabs the ring. He practices in the mirror with the ring. When he finally goes to bed she is sleeping.

Iggy meets with the man who climbed the side of the building. The man tells him how h ended up in Riker’s for 90 days. He is scared he will be brought back. He is hearing voices saying he is trapped. When he climbs they stop. Iggy gets him to take photos with his camera. Iggy asks him about the voices. He admits he didn’t hear anything. Iggy explains about trauma and being in the present. The man finally shares his real name.

Lauren tries to dodge Leyla. Leyla sees her. Lauren is trying to give her space. Leyla thanks her and then shares that she is having a problem with her visa. She may be deported. Meanwhile, Floyd learns he is going to be a dad.

The team ends up talking and realizes that too many from the bar that night before are missing; Helen, Elizabeth, Casey, and Trevor. Something is wrong.