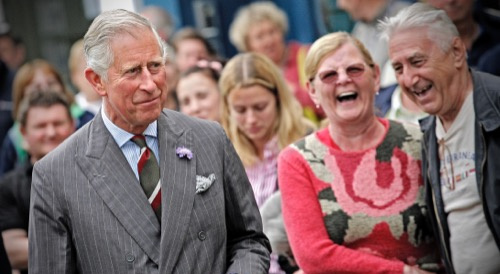 British royal family news divulges that King Charles has a warm soft spot for his employees who he recognizes with cold hard cash. According to Hello! His Majesty’s personal staff will be given a £600 one-time bonus this month. The payment is meant to help offset the rising cost of living in the UK.

The Sun reports that King Charles’ bonus payments are coming from his personal accounts and no taxpayer money will be used to treat his employees.

You may be wondering how many employees there are working for king Charles. There are nearly 500 regular employees (491) toiling at the royal palaces including Buckingham Palace, Balmoral, and Windsor Castle. There is an additional 101 staff at Clarence House, where Charles and his wife Queen Consort Camilla reside.

The news comes on the heels of Martin Lewis, host of The Martin Lewis Money Show, sharing a pic of Charles on social media.

Lewis posted a photo of himself with King Charles to Instagram. The two men are laughing at something hilarious and he captioned the pic: “Just found this old picture – from I’m guessing perhaps 8 years ago – when I first met Prince, now King, Charles at a reception supporting @samaritanscharity.”

“From (my possibly very dodgy) memory of it, he’d asked about my job. I explained and he’d said ‘So you tell people what they want to hear?’

He went on to say, “I replied it was more ‘Telling them what I thought they needed to do’ then as a cheeky aside I said ‘I suspect you’d be quite good at that, Sir.’ The photo is the reaction.”

Martin, a money-saving expert, has been giving tons of hints to cash-strapped Brits who are facing a steep increase in the cost of electricity.

Fans loved the post, with one fan writing, “Brilliant natural laughter,” and another saying, “This is fabulous.”