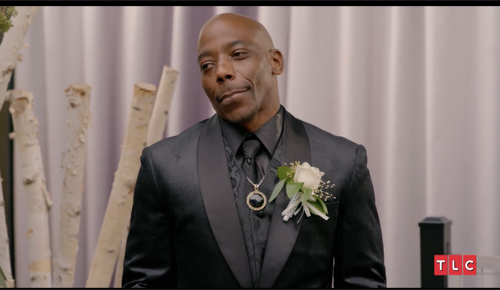 The Davises hope everything goes according to plan as they put together a commitment ceremony to celebrate their union with Danielle.”

Tonight’s episode begins with Roberta who has had a change of heart. She was no longer coming to the United States. After everything, she just didn’t want to become a part of the Merrifield family. Roberta struggled with jealousy as well as insecurity. She didn’t want Garrick dating other people. She didn’t want a third wife. She was offended at the mere suggestion of one. She also felt her relationship with both Garrick and Danielle had been cheapened by Garrick dating other women. Garrick and his wife Danielle wanted to be honest with Roberta, but it seems that had just clarified things for her and she realized she couldn’t do with the reality of being a sister wife.

Roberta literally waited until the last possible minute to tell the couple. The filming crew was heading to the airport to film her landing in the United States when they got a call from the Merrifields and they realized that Roberta wasn’t coming. She changed her mind. She devastated Danielle. Danielle felt Roberta never loved them if she could do something like this. They had planned on Roberta joining their family. Hell, they built a larger house under the illusion that they would need a bigger one once Roberta joined the family. They spent months talking to Roberta, reassuring Roberta, and they flew down to Brazil to see her.

They got a translator so that nothing could be lost in translation. Both Danielle and Garrick repeatedly were told by Roberta that she was coming to the United States and that she wanted to try for a baby right away. They were so excited when she told them this. She got their hopes up and for what? She just tore it all down again. Plus, Roberta has been pulling their chain for a while. She could have told them immediately that she didn’t want to come to the States once she heard about the other woman. She also could have told the couple within days of them returning to the States. She didn’t have to leave it until the last moment.

Though, there was some good news tonight. The Davis family added Danielle to the mix. Nick married Danielle in a ceremony where his two other wives both played a part in the wedding and it had been touching as well as beautiful. Danielle seemed like a good fit. She genuinely cared about Nick. She seemed open and caring about her sister wives. She didn’t mind that she has to share with her husband. She also went baby clothes shopping with the family because one of her sister wives was pregnant. Jennifer was. Jennifer was seven months along during the wedding and Nick had asked her to wear something to show off her belly.

Jennifer wore a crop top. It did show off the belly and it also was in keeping with the theme of the other sister wives. They all wore a bridal look. Not as bridal as Jennifer, but similar and the wedding itself had been beautiful. All three sister wives walked down the aisle together. They said their vows as a unit. They became a family. April and Jennifer mentioned in their confessional that they lost family once they became polygamists only they gained Nick’s family. Nick’s family was very supportive. They didn’t mind that Nick was a polygamist. They just loved him and wanted him to be happy.

The Merrifields meanwhile tried to recover from their loss. Only, they needed answers in order to receive closure. They have so many questions for Roberta. Why did she waste their time? Why did she agree to the visa if she wasn’t fully on board with the polygamist lifestyle? Why did she break up with them in a text after three-plus years? Roberta played them. Both Danielle and Garrick know this deep down. They talked about it with each other and they also discussed the divorce. Danielle and Garrick legally got a divorce so that he could bring Roberta to the States on a fiancé visa. They now questioned why did they bother to go through such a drastic step for a woman who couldn’t care less about them.

The Davis family however was still celebrating while the Merrifields were grieving. Danielle had a great reception party with her new family and everyone had a fun time dancing the night away. Danielle’s marriage to the polygamist family was the only wedding to take place this season. It also wouldn’t be the last in general. Tosha and Sidian applied for a K-1 visa for Arielle. The Epps family was still dating a few women. They were looking for the right fit. As were the Foleys who were also dating. And the Merrifields haven’t spoken to Roberta since the breakup text.