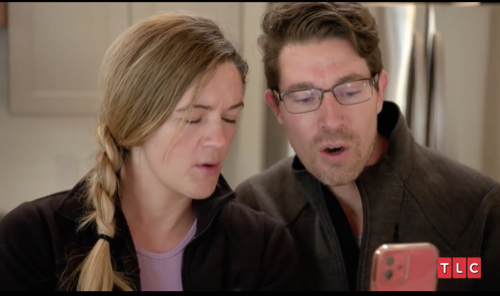 The Davises end their staycation with some worries. Dannielle’s family shares their concerns about Roberta coming to the US. Marcus Epps prepares for a date with a new potential sister wife.”

In tonight’s Seeking Sister Wife episode, The Foleys were up first. Brenda and her husband Steve had an uncomfortable conversation with Steve’s kids during his first marriage. The couple told the kids that they were seeking a sister wife, but teenage Jayden was disgusted by the idea. She told her dad that if he wants to date her he would have to leave Brenda. He couldn’t be married to more than one person. She even dared to say that he would have to choose between his girlfriend and her. She’s refusing to be in his life if he becomes a polygamist. She wants nothing to do with it. She doesn’t want her dad to do it. Her brother seemed to think it was okay as long as their dad was happy and that’s not where Jayden is right now.

Jayden hates polygamy. She won’t care for her siblings if her father has children with other people. She barely tolerates Brenda and Brenda was supposed to join the family as a second wife when Jayden’s mother decided to bail. It was probably with her mother in mind that Jayden was so against polygamy. She was against it now. Which was all that mattered. Steve couldn’t move forward until he knew without a doubt he wouldn’t be losing his daughter while doing so. Steve and Brenda were already derailed because the potential sister-wife they had been dating had decided to break up with them.

After the breakup, Steve and Brenda were going to need a little time before getting back out there. Something that Davis’ family has no problem with. The Davis was headed by Nick. He was married to both April and Jennifer. He was dating Danielle. Danielle had her first sleepover at the house. She had to share a bed with April while it was Jennifer’s night to be Nick. The next night had been her turn. She got to sleep with Nick as both April and Jennifer slept together. But Nick woke up in the night. He was feeling frisky and he ended up sleeping with Jennifer because April was uncomfortable in the bed. And had chosen to sleep on the couch.

Nick slept with two women in one night. He said he has a high sex drive. It apparently wouldn’t be fair to saddle one woman with his full sex drive and so that’s why he became a polygamist. He loves his two wives. He was growing to care for Danielle. He also felt there was room for even more wives once Danielle joined the family. His wives weren’t too sure about Danielle. They were worried she hadn’t fully pictured her life with them. What it would take to live in a polygamist marriage. The sacrifices and the jealousy that would have been dealt with. Danielle was optimistic now. April wanted to see if she would be just as optimistic down the line.

There have been other potentials that haven’t worked out in the past. They just weren’t ready for everything that being a polygamist required and so April didn’t want to get too excited about Danielle. She wanted to be realistic about herself. She likes Danielle. She just doesn’t know if Danielle has to want it takes to join their family. Speaking of potential, the Merrifield’s heard back from Roberta. Roberta went to go take care of her sick mom. She was barely in contact. Only she did call to tell them she’s been approved for the visa. She can come to the United States if she leaves in the next month. And so the Merrifield’s were worried about that.

They were worried that Roberta wouldn’t have to leave her mother. She might just choose to stay and then all the months would have been a waste. Roberta said she first wanted to make sure her mom was okay before she left her, but there was no guarantee that she would leave her mother and so the couple was worried. Danielle and Garrick talked about it with Danielle’s sister. Her sister didn’t approve of the polygamist lifestyle. She thought Danielle was only doing it to keep Garrick. She thinks Garrick was only doing it because he was in lust with Roberta. She also thought Roberta was only doing it to get a ticket to the United States.

The sister didn’t like hearing how they were pinning all their hopes on Roberta. She and her partner were also upset to hear that Roberta plans to get pregnant right away. They saw that as a worrying sign. Danielle and Garrick were in fact happy that Roberta wanted to get pregnant right away. They assumed that it meant Roberta was serious about joining their family and Danielle’s family saw it as Roberta trying to cement her position to stay in the United States. Most people wouldn’t trust Roberta in that situation. It was just Danielle and Garrick that did. They didn’t see any flaws in Roberta and they thought she would make a great addition to the family.

The Epps family was also looking to add one more. Marcus was married to Taryn and India. He was also now dating Janae. Janae was a woman he met while he was separated from Taryn and hadn’t met India yet. She was someone he was interested in. They had great chemistry. It didn’t work because Janae moved and now she’s back. She’s back. She’s still beautiful. She’s still interested in Marcus. She just didn’t know about his two wives. Marcus told her about them on his date with her tonight. He told her how he was now a polygamist. She was shocked. Janae would never be willing to share her man. She told Marcus as much.

Marcus tried to argue back with her. He took it as a win that she didn’t storm off and so he did his best to try and convince Janae of his lifestyle. But Janae couldn’t be tricked. She asked him if he was so happy – why was he with her?

Brenda meanwhile met with another potential Sister wife. She wants to develop a sisterly bond with this woman and April wasn’t sure if she wanted the same.