BY Kristine Francis on June 15, 2022 | Comments: Leave Comments
Related : Reality TV, Recap, So You Think You Can Dance, Television, TV 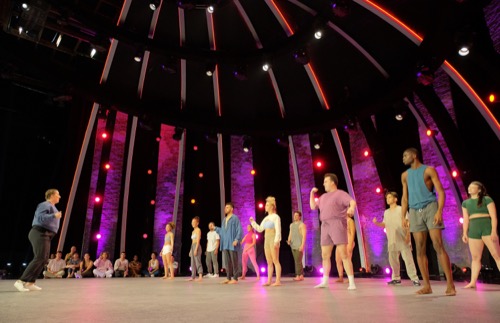 Tonight on FOX their Emmy-Award Winning So You Think You Can Dance airs with an all-new Wednesday, June 15, 2022, season 17 episode 5 episode and we have your SYTYCD recap below! In tonight’s So You Think You Can Dance season 17 episode 5 called, “The Dancers Dozen,” as per the FOX synopsis,“The Top 12 dancers – strategically chosen by our judging panel — Stephen “tWitch” Boss and JoJo Siwa, with the addition of new judge Leah Remini — have made it to the first studio show of the season.

This week, dancers will compete in pairs, as they showcase their talents in various dance styles, including contemporary, tap, hip-hop, ballroom, animation, breaking, and more.”

In. tonight’s SYTYCD episode, last week, forty-two great dancers fought their way through the choreography. But tonight was when the top twelve were revealed. The dances have all put their best on the line and they had to prove that they could take instruction as well as stand out. Not everyone was able to pull off the feat. There was also a shakeup amongst the judges. Matthew Morrison was out. Leah Remini was in. She was an Emmy award-winning actress. She just wasn’t much of a dancer. She was brought in after Matthew was accused of flirting with one of the contestants and so the producers were probably just looking for a high-profile woman that they ignored how this was a dance competition. And that wasn’t part of her background.

But anyway, on with the show. Virginia was in the top twelve. Juicy was not. Bot women came out together and one was eliminated. That was kind of cruel. Virginia also got to perform Hip Hop duo with James afterward. They looked good together. James came into the competition with his girlfriend and so staying without her had been tough for him. He wishes his girlfriend could have still been there, only he and Virginia impressed the judges with their first dance and they set the bar for all those that followed them. The next pairing had been between Jordan and Waverly. Waverly beat out Konnor while Jordan beat out Jocelyn.

Jocelyn was the sole tapper in the competition. With her gone, what will happen to tap? But Waverly and Jordan pulled off a beautiful Contemporary piece. It was haunting. It showed amazing chemistry between the dancers and not everyone gets that. Especially after just one week of dancing together. Anna was up next. She beat out Mia. She also got a stern warning from the judges about not getting any more chances. She had completely disappeared from the group routine and so the warning helped keep her on her toes. Anna got to dance with Beau. Beau was the guy who auditioned in heels.

Beau looked damn good in them. He performed a Broadway number with Anna and those two were funny. They made everyone laugh with their routine. It was entertaining and so it’s great that Beau beat out Samuel. Now, the next pairing had Thiago. His makeup was on point. He beat out Jerome. He also was paired with Essence. She beat out Flora. They performed a Contemporary number. They danced to an 80s cover song and it was good. It had the potential to be great and it failed at that because its toes weren’t pointed. Nor wad Thiago putting into character as much as he could have. And so it remains good when it could have been great.

Next up were Carter and Ralyn. Ralyn beat out Jojo. Carter beat out Tristen. Together they performed a jazz number and it was upbeat. It was fun. It was light. It required a lot of stamina and so that was the first thing the judges noticed about the contestants. They acknowledged how tough such a high-octane dance was. They also noticed how the tip they gave to Ralyn was doing wonders. They told her to bring her infectious laugh to the stage and that’s exactly what she did with this dance. The judges enjoyed the dance. The audience enjoyed the dance and so hopefully these two won’t end at the bottom.

Then there was Keaton. Keaton beat out Matthew. This was Matthew’s third try and again he still got eliminated because he was told he lacked consistency. But Keaton showed versatility. He showed that he belonged and so he got to dance a beautiful Contemporary number with Alexis. Alexis beat out Camila. She also delivered a one-of-a-kind dance with Keaton. It was beautiful. It was like moving poetry. The audience and even the judges were so moved that they gave this one a standing ovation. And that it was for the performances. The rest was up to the audience and the audience got to vote for the bottom four.

The bottom four were later revealed to be Carter, Virginia, Thiago, and Essence. They’ve all made their mark onstage. But it didn’t have to end in tragedy. It’s the three hundredth episode and so in honor of that, they told the contestants that they were all safe. They live to dance again!