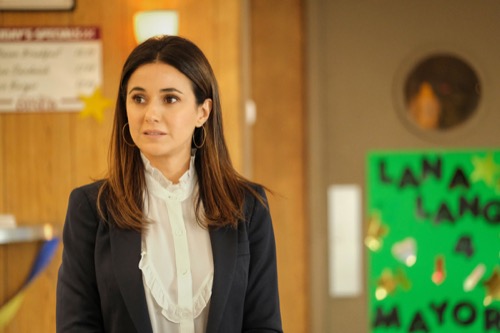 Tonight on the CW the series Superman & Lois airs with an all-new Tuesday, January 25, 2022, season 2 episode 3 and we have your Superman & Lois recap below. In tonight’s  Superman & Lois season, 2 episode 3 called, “The Thing in the Mines,” as or the CW synopsis, “ois (Elizabeth Tulloch) reaches out to Ret. General Lane (Dylan Walsh) as Clark’s (Tyler Hoechlin) visions become worse during heated arguments with both Jonathan (Jordan Elsass) and Jordan (Alex Garfin).

Meanwhile, Lana (Emmanuelle Chriqui) shares her frustrations with Kyle (Erik Valdez). Lastly, Natalie (Tayler Buck) learns that her father (Wole Parks) didn’t follow through on a promise he made to her.”

In tonight’s Superman & Lois episode, Superman crashes into the land after having another vision. He knows something in the mines may be causing this. He heads home and tells Lois and John. John needs to be the one to check out the mines to see what is really in there.

Jonathan shows Jordan one of their fellow teammates (Ryan) latest social media photos. He knows he is juicing. Jordan is more worried about Sarah and how she kissed another guy. John’s daughter comes in. She offers a girl’s point of view. They discuss him telling Sarah about his powers.

Kyle helps Lana with her mayoral campaign. She is a little stressed. Meanwhile, Jordan tells Clark he wants to tell Sarah about his powers. They argue. Clark’s eyes turn red hot. Jordan is surprised. Lois intervenes. She takes the kids to school. When she returns, she talks to Clark about his strong reaction. He tells her he cannot think straight today.

At school, Jonathan learns his fellow teammate Ryan is actually using something in Smallville to increase his strength. Jordan talks to Sarah. He wishes nothing changed.

Sam, Lois’ dad, comes to the farm to help them get access to the minds. After, Lois shows him the cult leader she has had her eye on. The same one who ruined Lucy’s life. Lois wants to take this woman down. She wants Sam to talk to Lucy about it. He doesn’t want to get int he middle.

At practice, Ryan tells Jonathan Candice has been selling him drugs. Jonathan jumps at him. They fight. When Clark tries to intervene, he is hit by Jonathan. Clark makes he go to the locker room where they argue. Clark loses control of his heat vision again.

Jonathan races Clark home. He tells Lois what happened. He knows what he is feeling has something to do with the mines. Lois consoles him. Meanwhile, Jonathan and Natalie play Madden while John travels through the mines after Sam gets him in. The woman escorting him attacks him from behind.

Lana’s meeting with the town about her mayoral run goes badly when some of the residents bring up her past and how she was duped by Morgan EEdge.

Clark hashes things out with the boys. He promises Jonathan he can teach him how to drive the truck. He tells Jordan that if in a year he loves Sarah, he can tell her then. Meanwhile, Lana gives advice to Sarah about being her authentic self while Sam and Lois have a heart to heart about Lucy and the cult leader. Sam officially sides with Lois.

Clark and Lois talk about the kids on the front porch. He feels like a failure. She tells him how resilient kids are. He sudden falls to the porch floor. Its breaking out, he tells her. He rushes to the mines and comes face to face with the thing from the mines. The military is there. It is powerful, overpowering Superman. John arrives with his suit. He gets thrown into the air after trying to help Superman. Superman sees the monster’s face. It looks like him.

Back at the farm, Natalie tells John she wants him to stop suiting up. He tells her he needs to help Lois and Clark. She offers to fix the suit. Jonathan goes to buy drugs for himself from Candice. Lois waits for Lucy at the diner. The cult leader shows.