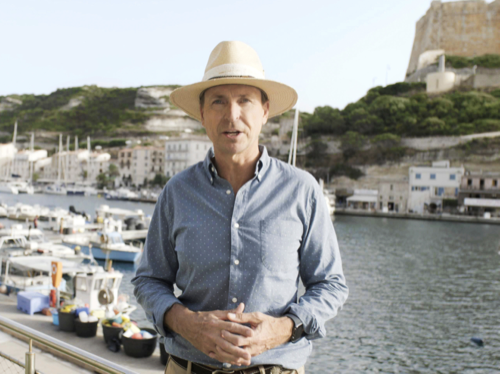 Tonight the CBS series The Amazing Race airs with an all-new Wednesday, February 9, 2022, season 33 episode 7 and we have your The Amazing Race recap below. In tonight’s season, 33 episode 7 called, “Gently Down The Stream,” as per the CBS synopsis, “Teams continue racing through Corsica, France, where each team member must try a piece of casu martzu, also known as maggot cheese.”

Tonight’s episode begins in Corsica, France, after spending the night there, Kim & Penn, Raquel & Carla are the first teams to leave and have to drive south to a 16th century watch tower at Tour De Fautea where they will be treated to a local delicacy, cazu marzu, a rotten cheese brought to life with live maggots. The teams drive in luxury, convertibles. The teams are really trying to enjoy themselves on this drive.

The first two teams stop and ask a man for directions to make sure they are going the right way. The other teams are leaving, Ryan & Dusty are stressing that they have fallen behind in the pack. Arun & Natalie on the other hand are psyched that they have gained momentum. Kim & Penn mess up a little but, Raquel & Carla jet set ahead of them. The walk from the parking is a long one to get to the tower.

The cheese is gross with the maggots crawling in it, but Raquel & Carla eat it and get their next clue, it’s a Detour, “row, row, row your boat,” teams have to launch a see through kayak and choose a fish. Then kayak around buoys and find 10 matching fish to get their next clue, or in “gently down the stream,” teams must take a 15-minute cruise around the water looking for 10 metal fish. At the end of their journey, go to a fish shop and on a fish chart sort through and find the exact sequence of the fish they saw under water.

Ryan & Dusty eat the cheese like it is chocolate cake. Lulu & Lala are a whole other story, lots of gagging. In gently down the stream the water is a bit murky because they are in a lake, but the first two teams to depart are together so it is four sets of eyes on the fish under water. If they don’t get it right, they have to do it all over again. Ryan & Dusty choose the kayaks and they think it is a no-brainer, it is more physical, but if they pay attention they should do well.

Kim & Penn, Raquel & Cayla are done thanks to Penn’s great memory. Teams must now travel to the most souther part of Cosica to Port De Plaisance, this island’s oldest town and France’s best kept secret is where they have to head.

Ryan & Dusty are not having an easy time of it, water gets in their kayak and they both fall out. They have to get back in, calm down and regroup, grab the fish that fell out. Raquel & Cayla are currently in first place with Kim & Penn right behind them. A Roadblock is next and it’s called, “Who’s Feeling Knotted Up?” Teams will have to repair holes in fishing nets, everything they need to do the job is in a bucket for them. A man is sitting down on the dock, he demonstrates on how to repair the net.

Ryan & Dusty have their ten fish and are heading back to shore. Meanwhile, Lulu & Lala, Arun & Natalia don’t seem to be remembering the fish sequence very well. Their first attempt is wrong, they have to go back out in the water while Ryan & Dusty are in the car and on the way to the Detour.

The last two teams are finally on their way to the Detour, Ryan & Dusty are there and taking it slow and steady. Penn has it, he is done, his net mended. Kim & Penn have to make their way on foot to the pit stop at the Bonicacio Cliffs, the last team to check in may be eliminated. There is a lot of waking to get to the top of the cliffs, Kim & Penn do it, they are the first team to arrive. They have won a trip for two to Turkey for six nights. Raquel & Cayla are in second place. Ryan & Dusty are team number three while Natalia is really struggling with the fishing net. Lulu & Lala are in fourth place. Arun & Natalia are team number five, but it is a non-elimination leg, so they are still in the race. Arun says they are a cat with nine lives.