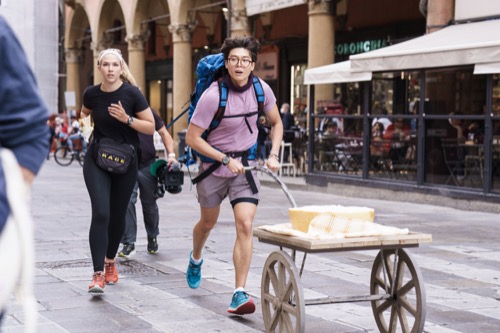 Tonight the CBS series The Amazing Race airs with an all-new Wednesday, October 5, 2022, season 34 episode 3 and we have your The Amazing Race recap below. In tonight’s season, 34 episode 3  called, “It’s All in the Details,” as per the CBS synopsis, “Teams start a Megaleg in Bologna, Italy, where they must cart an 88-pound wheel of Parmigiano cheese and build a Ducati Panigale V4 motorcycle.

Tonight’s The Amazing Race episode begins with all teams heading to Italy on a chartered plane. In Bologna, Italy, teams will begin a mega leg, two cities, two roadblocks, and two detours. At the end of it all, another team will be eliminated. In their very first mega leg, teams must go to Arco Del Meloncello to find their next clue.

Marcus and Michael are the first teams to get their next clue, it’s a detour, HEAD OF THE CLASS where they have to listen to a 16th-century lecturer team will travel to the courtyard to take a timed exam. They will have to identify 16 bones, muscles, and organs within 90 seconds. If they fail, they must go back to class. Once they pass their test, they will get their next clue. In the BIG CHEESE, teams will carry their 88-pound cheese wheel to a restaurant and have it sliced by a professional cutter in two. Then deliver each piece to two restaurants and bring their receipts back to where they got the cheese wheel, to get their next clue.

Claire & Derek were running at the back in the last leg and they are hoping to move up in this mega leg.

All three groups of races are on their way, the twins are trying to trust themselves more on this leg so they can build up their confidence.

It is Rich & Dom’s anniversary, it means everything to them that they are racing and don’t want to be eliminated in this mega leg.

Marcus & Michael decide to deliver the cheese. Rich & Dom are lost and ask for directions. Shark & Linton realize they should not have chosen the class, it is too hard.

Emily & Molly are having trouble with the car like other couples, it is a stick shift.

Michael & Marcus now have to drive themselves to the Ducati factory to find their next clue.

In the end, teams realize the cheese detour is much more doable than the class.

Rich & Dom are also having trouble with their car and are falling behind.

Mattie took anatomy in college so she and Quinton choose the class and ace it. Emily & Molly, Abby & Will, also complete it.

Michael & Marcus arrive at Ducati and get their next clue, it’s a roadblock, “who is ready for a break?” Speed is a way of life in the motor valley, the flagship model, the Panigale V4, the fastest supersport bike they make. Teams must first assemble the wheels and brakes, then have their work approved by a mechanic before installing the body panels. When the lead mechanic says it is race ready, they will get their next clue. Michael & Marcus both own bikes.

Aubrey & David, Linton & Shark have finally finished the class and are on their way to find their next clue.

Rich & Dom arrive at the class and are surprised to see Lumumba & Glenda because they were in the first group.

Claire insists on putting the motorcycle together because she wanted to make up for disappointing Derek in the yodel challenge. But that was a mistake, she doesn’t know how to use a wrench and is starting to get frustrated. Meanwhile, a lot of the teams are catching up.

Derek says he can’t even watch Claire anymore, it is so brutal, and hears her saying she doesn’t know what to do.

Michael & Marcus are done building the motorcycle and now have to drive themselves to the city of Florence and find Villa Bardini for the next roadblock clue.

The rest of the teams are having a hard time with the motorcycle, this is the time for the teams at the back to catch up. Claire does it, they are on their way.