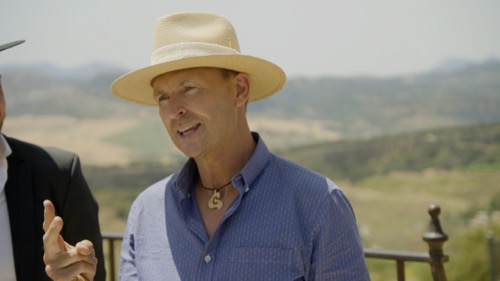 Tonight the CBS series The Amazing Race airs with an all-new Wednesday, November 23, 2022, season 34 episode 10 and we have your The Amazing Race recap below. In tonight’s season, 34 episode 10 called, “Don’t Look Down,” as per the CBS synopsis, “Teams continue the megaleg in Ronda, Spain, where they must choose to build an arch brick by brick or dress for success.”

Tonight’s Amazing Race episode begins with teams having to complete the second half of their mega leg after driving themselves to Ronda, Spain, a popular summer destination for Orson Welles and Ernest Hemingway. The teams will face a second detour and second roadblock.

Derek and Claire are off with a bumpy start, they left their in first and have a feeling they fell behind after going the wrong way.

Marcus & Michael are in lat place, they know Emily is injured so they hope they can move ahead of them.

In the Detour, ‘Bend Over Backwards’, teams need to support each other to build an arch, easier said than done. Flamingo dancing is a combination of hand clapping, castanets, foto stopping, moving and emotion. In ‘Dress For Success’, after studying the performance teams must find the accessories needed to dress one of these dancers.

Emily & Molly are in fourth place, with Marcus & Michael right behind them. Luise & Michelle already is at the Detour looking for the dancers accessories. They have done it multiple times and eep messing up, they don’t realize that they have the wrong shawl, they are so confused and can’t figure it out. Meanwhile, teams are catching up, they are losing valuable time.

Aubrey & David, Claire & Derek are all working together, while Luis and Michelle finally complete he Detour and move on. Aubrey & David do it on the first try. Luis & Michelle are in first place, and get their next clue, “who has been paying attention?” and they choose Michelle. After starting the second part of the mega leg on the Puente Nuevo bridge in Ronda, they will complete it under the bridge were they will precariously balancing three hundred feet above a gorge. They will need to remember the flag they saw when they arrived in Ronda, if they pick the wrong flag, they have to repeat the high wire act and try it again. Luis hopes they can keep their first place.

Marcus & Michael have arrived in Ronda, they decide to do Bend Over Backwards, the only to choose it. Michelle has no idea which is the correct flag, so she just guesses. She does it, first try. They must now head to Mirador de Ronda at the Pit Stop where Phil will be waiting for them.

Luis & Michelle are the first team to arrive at the Pit Stop and they are two legs away from winning the million dollar prize. They have Expedia reward points good for a five night trip for two to Tokyo.

Claire and Aubrey and both doing the high wire, even though they are afraid of heights they decided to do it because they have good memories. Claire is having such a hard time, she is shaking like crazy and when Aubrey tries to speak to her she tells her to be quiet. Marcus & Michael are on their second try, they are missing rocks within the bricks and have to keep trying. Emily & Molly are on their second try trying to find the accessories for the dancer.

Claire and Aubrey both choose correctly, after walking the highwire Claire has a panic attack and starts crying, she was really scared.

Aubrey & David are team number two at the Pit Stop. Derek & Claire the third team, Derek says he thinks she conquered her fears.

Emily & Molly are finished at at that high wire, Marcus & Michael are behind them still. Luckily for the girls, they pick the right flag on the first try. The guys also do it on first try. Emily & Molly arrive at the Pit Stop, they are team number four, with a bad leg, they beat out one of the strongest teams.

Marcus & Michael are the last team to arrive and are eliminated.