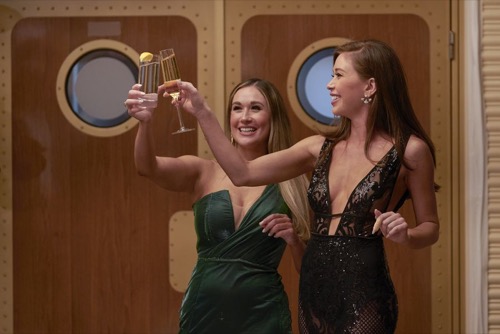 The Bachelorette airs on ABC this evening with an all-new Monday, August 8, 2022, episode, and we have your weekly The Bachelorette recap below. In tonight’s season 19 episode 5 as per the ABC synopsis, “Gabby, Rachel, and their 14 remaining men continue their seaside journey across Europe, docking at a city known for its rich history, romantic flair, and delicious chocolate and beer: Bruges!

Romance is in the air as connections deepen, but not all is coming up roses when Logan decides to confess feelings that send the ship, and our leading ladies, spinning. After reckoning with the fallout of Logan’s decision, Rachel makes a shocking choice that affects all her remaining men. . ”

Tonight’s The Bachelorette episode begins with Gabby so excited because they are sailing to another city in Belgium and everyone is in really good spirits. As her connections get deeper, she doesn’t know who is going to surprise her. Rachel is also excited to be in Belgium, it is so romantic, a true fairytale. She is excited about a fresh start, the last few weeks have been difficult for her. Today she has the group date, and she is confident about the guys are left there for her.

Team Rachel is talking and they all know they have to show up for Rachel. But, Logan, has feelings for Gabby and hasn’t said anything yet. A date card arrives, Tino, Zach, Meatball, Ethan, Tyler, and Logan, “how sweet it is to be loved by you,” Rachel. Logan tells the guys this one is mixed feelings for him. Before the group date takes off, Logan wants to go speak to Rachel.

Logan shows up at Rachel’s door and asks to go in. He tells her that he is honored every time she puts a rose on him, but something is holding him back a bit, something that is anchoring him. He shared a real connection with her, but he also had a strong connection with Gabby. He thought he was going to receive a rose from Gabby, not her. Everyone else on the date card wants to end up with her, but he has feelings for Gabby and can’t attend the group date, he also wants to step away from pursuing things with her. She tells him that she wishes he would have told her earlier. Rachel was really hoping that things would step up with Logan, she did give him the first group date rose.

Time for Rachel’s group date, Logan is not there and the other guys don’t know why. Meanwhile, Rachel is crying again, she feels rejected week after week. Jesse goes to see Rachel, she says she thought she would be past the point of people changing their minds, and they are not, and it’s scary. She feels she has walls going up and it’s not fair to the other guys.

Jesse goes to see the guys and tells them that Rachel is canceling the group date, some stuff went down and she doesn’t feel like she is ok to join them. Although she will meet them for the cocktail party that night.

Logan couldn’t continue the charade and he hopes that Gabby feels the way he does. Logan goes to speak to Gabby. He tells her what he told Rachel and that she was frustrated. They laugh but he tells her that this is her worst nightmare. She then tells him that she has to put her friends first.

Gabby then speaks to Rachel who says she knows he is following his heart but how many roses was he going to take? Rachel tells her that she had no group date, she asked the guys to give 100% and she couldn’t, she felt like such a failure and humiliated. Gabby says she would feel the same way. Rachel appreciates that the first thing Gabby did was go see her. She doesn’t think Logan is trustworthy, but at the end of the day, it is Gabby’s decision if Logan stays or not.

Time for the cocktail party, the guys are gloomy and want to make up for the lost time. The guys are trying to pick up, be positive and wait until Rachel tells them what happened. Rachel walks into the room and hugs them one by one. She tells them she is sorry, but Logan came to her room and told her that he was interested in pursuing a relationship with Gabby and it has been tough the constant rejection. Rachel feels very vulnerable and nervous. All the guys make her feel special, Tino tells her that he wants to be her friend and she can confide in him with anything. Zach yelled out her frustrations with her. She decides to give her group date rose to Tino.

Time for Gabby to have her group date, they are going to explore the city together. They take a boat ride and then stop for waffles. Next, they join some children and play soccer with them. Out of nowhere, this big Belgium guy brings out buckets of fish, then he plays rock, paper, and scissors with the guys and if they lose, he slaps them in the face with a fish. Overall, the guys had a great day, they all really get along and there was no drama. Time for the cocktail party, the men are happy that there is a small group of them, they won’t have to fight for time with Gabby. They toast to their evening. Then, Logan walks in and asks the guys how they are. Then he proceeds to tell the men that he wants to pursue Gabby and not Rachel.

Gabby gave him a yes to join Team Gabby and the other guys are not happy about it. And, Logan will be moving in with them as well. Gabby walks in and she makes a toast with the guys about having an amazing night. She is worried about the evening, she doesn’t want to jeopardize the relationships with the other men by bringing Logan to the group. Gabby enjoys time with all the men, she even leans in for a big kiss with Logan when they spend time together. In the end, Nate got the group date rose. Erich is upset, he is thinking that maybe it is a waste of his time being there because he thought he had a great connection with Gabby and he didn’t get the rose.

Rachel is on a one-on-one date with Aven and she couldn’t be more excited. They take a horse-drawn carriage ride and then head to a chocolate shop. During dinner, he tells her how his parent’s divorce caused him not to have so much time with his mother, but when he got older, they got closer and made up for the missed time. She tells him that she truly had the best day with him and wishes they had more time together, she gives him the rose.

Gabby is on her one-on-one date with Johnny, they visit a brewery and Johnny couldn’t be happier. They continue on with their day at the brewery which includes a spa day in everything beer. Later at dinner, Johnny says that he was really out of his comfort zone and he had fun. He tells her that he is the least confident person, and he is hard on himself. Then he says he struggles with depression. She says she can relate, she has struggled with anxiety and depression because she didn’t learn things as a kid, and she thinks they need to be easier on themselves. Gabby gives him the rose.

It is time for the joint Cocktail party before the Rose Ceremony. Gabby spends time with Nate, she bought him some chocolate in Belgium for his daughter and he is really touched. Meanwhile, Logan is nervous, he doesn’t want to lose this with Gabby, but he is not confident that he is going to get a rose.

Time for the Rose Ceremony and if Logan gets a rose, it is going to cause a stir.

Gabby gives a rose to Jason, Spencer, Erich, and Logan. Mario and Mike are going home.

Rachel gives a rose to Zach, Tyler, and Ethan. Meatball is going home.