The Bold and the Beautiful Spoilers: Bill Recruits Thomas for Ridge Revenge After Forrester Firing? 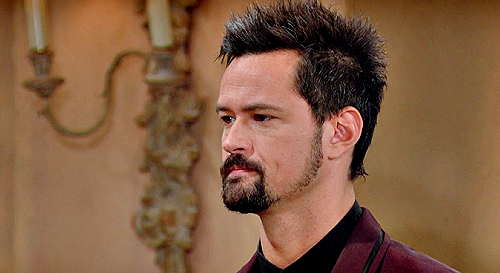 The Bold and the Beautiful (B&B) spoilers tease that Bill Spencer (Don Diamont) may recruit Thomas Forrester (Matthew Atkinson) for some Ridge Forrester (Thorsten Kaye) revenge. Could Bill and Thomas become shocking allies after Thomas gets fired from Forrester Creations?

Thomas will indeed get the boot from his family company during the week of December 5-9. In fact, Thomas will get thrown out of his family altogether!

Ridge will ban Thomas from all things Forrester and leave him at a real low point. What happens once Thomas is disowned, unemployed and at rock bottom?

Thomas will no doubt feel rather directionless – not to mention he’ll be angry over how all this turned out.

Thomas doesn’t think he did anything wrong and continues to justify his CPS call setup.

That could be crucial since Thomas will have nothing left to lose and could be poised to continue down a sinister path.

Meanwhile, Bill will put his sword necklace back on during the week of December 5-9 as well.

Now that Bill realizes the positive changes in his life got him nowhere, he’s ready to revert to his devious side again.

Thomas also thinks he tried to change for the better, but that plan didn’t work out for him.

It could give Thomas something in common with Bill, who might see the potential for a vengeful ally.

Bill has been known to rant about Thomas being a nutjob, but we can’t forget that Thomas saved Bill and Liam Spencer (Scott Clifton) from prison once upon a time.

Maybe Bill could think back to Thomas turning Vinny Walker’s (Joe LoCicero) suicide confession over to the cops.

Although Bill may not be pleased over Thomas targeting Brooke, he wouldn’t have minded if the plan had worked.

Bill might respect Thomas on some level for his commitment to destroying Ridge and Brooke’s mismatched relationship.

We’ll be dealing with the old conniving Bill, so that’s important to remember.

Bill may start to see Thomas as someone who could play on his sneaky team – maybe as his new right-hand man at Spencer Publications.

This might even lead to Thomas and Bill teaming up for revenge on Ridge!

Bill has always hated “The Dressmaker” – and Thomas will soon have plenty of reasons to strike back at his father, too.

The Bold and the Beautiful spoilers say Thomas and Bill might form a twisted alliance, so don’t miss what’s in store.

CDL’s the place to be for great Bold and the Beautiful spoilers, updates and news, so make us your favorite B&B hotspot.