The Bold and the Beautiful Spoilers: Deacon Proposes To Sheila – Wedding Ring Shocker 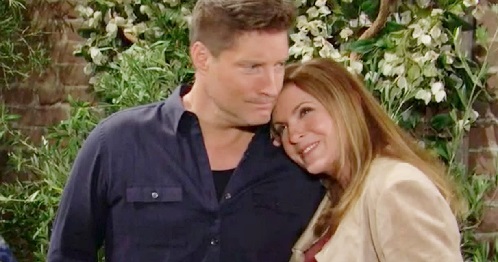 The Bold and the Beautiful (B&B) spoilers tease that Deacon Sharpe (Sean Kanan) may be forced to propose marriage to Sheila Carter (Kimberlin Brown). Will the discovery of Brooke Forrester’s (Katherine Kelly Lang) engagement ring bring a cover story?

Let’s look at some crucial clues as we try to nail down where this hot plot is headed. For starters, we know Deacon will make a move that’ll change Sheila’s life during November sweeps.

That lines up with a potential marriage proposal – though Deacon may get stuck making one inadvertently.

On the November 7 episode, Deacon treated Sheila to a special night at Il Giardino after hours. That led to Sheila jokingly wondering if Deacon was going to propose.

Although Deacon shut down the idea, he may have to think fast if Sheila finds Brooke’s rejected engagement ring. Sheila doesn’t know that Deacon popped the question to Brooke and got turned down, so she’s going to have questions if she stumbles across that ring.

Of course, Sheila could easily find it since she lives with Deacon and seems content to clean up after him. Deacon admitted to carrying that ring around before he asked Brooke to marry him.

Since Hope Spencer (Annika Noelle) doesn’t want Deacon to give up, perhaps he’s still carrying that ring around now. Sheila could discover it in Deacon’s pocket while doing laundry or something along those lines.

Regardless, Sheila’s mind might drift back to their special night at Il Giardino and her proposal joke. Deacon might run with that and act like Sheila inspired him to propose after all.

It’d be better than the truth since Deacon certainly can’t tell Sheila that he asked Brooke to marry him instead. That would send Sheila over the edge, so Deacon may offer a cover story that results in him asking for Sheila’s hand in marriage.

Deacon might have to pretend he has faith in Sheila wiggling out of trouble, even if he thinks that’s delusional. We may see Deacon pretend marriage can still happen for them despite knowing it can’t legally take place in captivity.

It’s not like Deacon and Sheila can have some big ceremony with a minister, so Deacon may have to lie and act like there’s hope for Sheila’s new chapter. Whatever the case, B&B is offering some marriage proposal hints, so we’ll see if Deacon ends up forced to ask Sheila to marry him.