The Bold and the Beautiful Spoilers: Ridge Defends Thomas to the Cops After Brooke Fights With Son 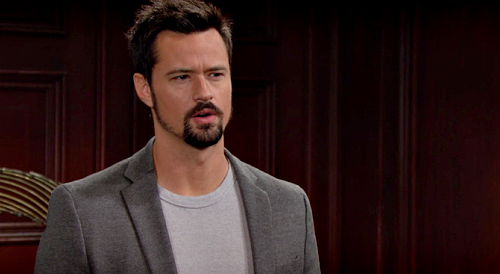 The Bold and the Beautiful (B&B) spoilers tease that Ridge Forrester (Thorsten Kaye) will defend Thomas Forrester (Matthew Atkinson) to the cops, so a controversial police matter will erupt after a Brooke Forrester (Katherine Kelly Lang) faceoff.

It’ll be a case of “he said, she said” as the authorities pay a visit to the Forrester mansion.

Thomas will land on the hot seat for making Brooke fear for her own safety, but Ridge will still feel the need to defend his son.

Ridge wants to believe Thomas has changed for the better, so he’ll rush to his boy’s defense and try to make all the police chaos go away.

Perhaps Ridge will argue that all this is a misunderstanding – one that can be handled privately without the cops getting involved.

Although Thomas may feel supported initially, he’ll later feel like Ridge is in Brooke’s corner.

Ridge won’t want to discount Brooke’s side of the story either, so some family drama will explode.

Thomas will no doubt rant about Brooke using his past against him.

From where Thomas is standing, he may think Brooke is now manipulating the situation to make him look bad.

Ridge will definitely feel caught in the middle, but he’ll ultimately blow up at Thomas over his behavior.

There’ll be a father-son showdown as Ridge tries to get to the truth of all this and figure out who he should really be siding with.

Nevertheless, Ridge may stand his ground on not letting this turn into a major police scandal.

That wouldn’t be good for anyone – especially not Forrester Creations ahead of their fall fashion show.

The company has an image and reputation to protect, so Ridge may be mindful of that in the coming episodes.

B&B fans will see some serious conflict and tight spots during the week of September 26-30, so don’t miss what’s ahead.

The Bold and the Beautiful spoilers say the authorities will investigate Thomas after he makes Brooke feel threatened, so stay tuned for more mayhem.

CDL’s the place to be for exciting Bold and the Beautiful spoilers, updates and news, so make us your go-to B&B source.