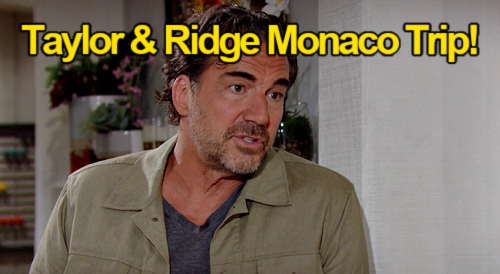 The Bold and the Beautiful (B&B) spoilers tease that Steffy Forrester’s (Jacqueline MacInnes Wood) crisis will bring Taylor Hayes (Krista Allen) and Ridge Forrester’s (Thorsten Kaye) Monaco flight. These parents will take a trip for their daughter’s mental health, so here’s what fans can expect.

Steffy has been trying to stay strong for the kids and find a way to carry on without John “Finn” Finnegan (Tanner Novlan).

Unfortunately, the connection between Finn and Steffy is making it harder for her to move on.

Steffy still felt Finn’s presence around every corner at the cliff house, so she was hoping to escape the pain of that by leaving on this trip.

However, it’s proving impossible to avoid all the Finn memories and their lingering bond – partly because Finn is still alive and in distress with Sheila Carter (Kimberlin Brown).

Steffy may sense that Finn’s in a situation that’s becoming increasingly dire, even if she doesn’t understand what’s in her heart.

As Finn continues to struggle, Steffy will struggle as well and feel like she’s losing it.

After Steffy seeks treatment at a mental health facility, Ridge and Taylor will receive that troubling news.

Although Taylor and Ridge will be proud of Steffy for admitting she needs help, they’ll still battle major concerns and won’t want her to go through this alone.

During the week of July 25-29, Ridge and Taylor catch a flight to Monaco to see Steffy – apparently at her new facility.

Finn will ultimately have an incredible reunion with Steffy, but that’ll have to come later.

The first step is getting away from out-of-control Sheila, but then Finn can catch his own flight to Monaco on a mission to see Steffy once again.

Ridge and Taylor will assist Finn upon his arrival, so some fun material is on the way.

Steffy will have a rough time until the truth comes out, but there’s light at the end of this tunnel!

The Bold and the Beautiful spoilers say Taylor and Ridge will comfort Steffy during her mental health crisis, so stay tuned for some Monaco drama.

CDL will have other great Bold and the Beautiful spoilers, updates and news, so stop by often.